New York, Dec 12: A group of women who have publicly accused Donald Trump of sexual harassment and assault, have detailed their accounts of being groped, fondled and forcibly kissed by the US President, the media reported. 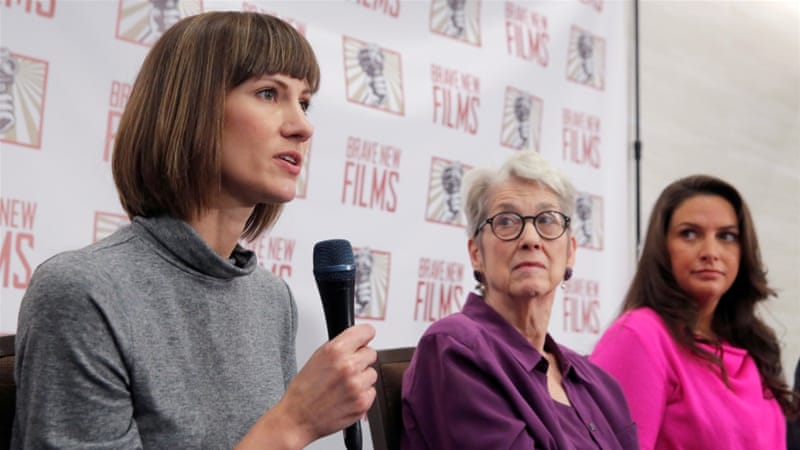 “This was serial misconduct and perversion on the part of Trump. Unfortunately, this behaviour isn’t rare in our society, and people of all backgrounds can be victims. The only reason I am here today is that this offender is now the President of our country,” Rachel Crooks, a former Bayrock Group receptionist who accused the President of kissing her on the mouth without her consent in 2005, said at a press conference on Monday.

Samantha Holvey, the former Miss North Carolina 2006 who has accused Trump of inspecting beauty pageant contestants, and Jessica Leeds, who said the President of grabbing her chest and attempting to move his hand up her skirt on a flight, also appeared with Crooks at the conference, reports CNN.

Brave New Films, a production company that released a film on the women who have accused Trump of sexual assault, hosted the event.

At least 15 women have come forward with a wide range of accusations against Trump, ranging from sexual harassment and sexual assault to lewd behaviour around women.

“In an objective setting, without question, a person with this record would have entered the graveyard of political aspirations, never to return… Yet here we are with that man as President.”

Leeds added that while some areas of society were “being held accountable for unwanted behaviour… We are not holding our President accountable for what he is and who he is”.

On Monday night, White House press secretary Sarah Sanders said that the allegations took place “long before he was elected president” and that Trump has “addressed these accusations directly and denied all of these allegations”.

Sanders also claimed that “eyewitnesses” have backed up Trump’s denials.

“The President has denied these allegations, as have eyewitnesses.

“Several reports have shown those eyewitnesses also back up the President’s claim in this process and again, the American people knew this and voted for the President and we feel like we are ready to move forward in that process.”

On Sunday, US Ambassador to the UN Nikki Haley said that women who accuse a man of inappropriate sexual behaviour including Trump “should be heard”, CNN reported.

The renewed focus on Trump’s accusers comes as Alabama Senate candidate Roy Moore fights to win a Republican seat, despite accusations that he pursued relationships with teenagers, including molesting a 14-year-old and sexually assaulting a 16-year-old when he was in his 30s.

Moore has denied all the allegations and Trump has stood by Moore despite the accusations.

Trump to send astronauts back to moon

UN appeals for countries to take in 1,300 Libyan refugees

Islamabad, Feb 28 : Pakistan’s economic indicators are seeing a constant improvement due to efforts made by the current government to overcome the serious economic challenges, the Prime Minister’s Office said on Friday.

Prime Minister Imran Khan, chairing a meeting of his economic team, expressed satisfaction over the improvement in all sectors, adding that his government is making efforts to bring a trickle-down effect of the improving economy on general public and in this regard steps are being taken to provide relief to low income and salaried class of the country, Xinhua reported.

He also directed the economic team to keep the public updated about the positive indicators of the economy in a bid to win the confidence of the local businessman to invest in the country.

Tehran, Feb 28 Iran’s Vice President for Women and Family Affairs Masoumeh Ebtekar has tested positive for the coronavirus, an official said on Thursday.

“Everyone in the vice president’s team was also tested and the results will be available on Saturday,” she said.

Ebtekar is not the first high-ranking Iranian official to contract the virus.

Ebtekar, joins the deputy health minister, the head of the national security commission and a reformist MP who have been infected with the virus, reports Efe news.

She tested positive on Thursday after showing symptoms the previous day during a cabinet meeting, according to state TV.

The politician is one of the most recognizable in the Islamic Republic and previously held the position of environment minister.

Iran has reported 26 deaths from the deadly disease and 245 cases total with a dramatic surge of 106 new infections registered on Thursday, the Health Ministry said.

Tehran authorities have decided to close down schools and universities in the country to curb the spread of the disease.

Friday prayers in the capital have also been cancelled.

Amid the spread of the virus, neighbouring countries have closed their land borders with Iran and most airlines have suspended their flights or imposed restrictions on air travel to the country.

Seoul, Feb 28 The number of coronavirus cases in South Korea increased to 2,022 on Friday, with a total of 13 fatalities as the nation aggressively counters the fast-spreading virus with massive testing, particularly for 210,000 followers of a religious sect at the centre of the epidemic.

The 256 new cases brought the nation’s total infections to 2,022, the Yonhap News Agency quoted the Korea Centers for Disease Control and Prevention (KCDC) as saying.

Only two days ago, the number of infections exceeded 1,000.

More than half of newly confirmed cases were linked to a branch of the Shincheonji Church of Jesus in the southeastern city of Daegu, 300 km southeast of Seoul.

Of the 256 new cases, 182 are in Daegu, and 49 are in the neighbouring North Gyeongsang Province.

Since raising the virus alert level to “red”, the highest level, on Sunday, health authorities have focused on halting the spread of the virus in Daegu, the epicentre of the virus outbreak in South Korea, and North Gyeongsang.

Experts said the number of confirmed cases is expected to jump in the coming days as health authorities have begun testing more than 210,000 members of the Shincheonji Church of Jesus.

The government also ordered another 1,638 Shincheonji followers to self-isolate as they have shown symptoms, Yonhap News Agency said in its report.

Since the first coronavirus case — a Chinese woman from Wuhan, the epicentre of the outbreak — on January 20, the pace of infections had not been alarming until February 18, when a 61-year-old woman who is tied to the Daegu religious sect tested positive for the virus.

Since then, the nation has seen an explosion in infections as it accelerated virus tests on potential cases.