New Delhi, Sep 12: Tech aficionados in India were in for a treat on Tuesday when Samsung launched its latest flagship Galaxy Note 8 device. The premium smartphone, at Rs 67,900, looks set to satisfy technology junkies who are on-the-go.

“Note 8 looks a great device with Samsung getting the software and AI piece right over there. With the likely announcement of Apple’s premium phone, flagship competition is likely to push the overall average selling price (ASP) of premium segment after the introduction of Note 8 at newer price points,” Tarun Pathak, Associate Director, Mobile Devices and Ecosystems, Counterpoint Research, told IANS.

The device (we experienced Maple Gold one) comes with 6GB RAM and 64GB internal memory (expandable up to 256GB).

Upfront is the patented 6.3-inch “Infinity Display” with curved edges. On the left bumper, there is a volume rocker and a dedicated button for Samsung’s artificial intelligence (AI) assistant “Bixby”. On the right bumper, you can find the power button.

Galaxy Note 8 is fitted with a 12MP dual-camera system at the rear, along side a flash and fingerprint sensor.

The rear camera comes with two 12MP lenses — wide angle and telephoto. Both are equipped with Optical Image Stabilisation (OIS) for sharper photos and videos.

The photos came out very well in both day and night light conditions.

Users can change the area and amount of blur by using “Live Focus” feature. We also tried “Pro” mode and “Food”, and the results were promising.

The SIM tray is at the top and below are the charging port, a 3.5mm jack, speaker grill and an enhanced “S-Pen”. 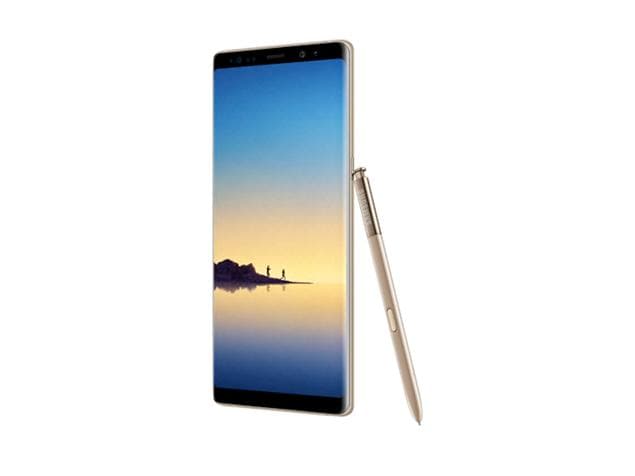 Samsung has given more power to the S-Pen which has a latency of less than 50 milliseconds. Pulling out of S-Pen opens a host of options, including ones that would let you scribble on screen, magnify and even translate languages for you.

The South Korean giant included a couple of test videos in the device that played flawlessly with high-quality output.

The phone has an aspect ratio of 18.5:9 and fits quite well in the hand. Other security options such as “Face Lock” and “Iris scanner” are easy to set up. In our review, the features worked fine.

A peek into the hardware information showed that 3.3GB of 6GB RAM was free. The device runs an Android 7.1.1 Nougat. Almost 53GB of the total 64GB of the memory was available for users.

Housing a 3,300mAh battery, Galaxy Note8 supports the most advanced wireless charging capabilities (WPC and PMA) and is fast-charging compatible with QC 2.0.

The device appears set to give Apple real tough competition in the premium segment.

“With no strong player in the Android ecosystem in the super-premium segment, it’s all clear space for Samsung where Note 8 fits in. So while iPhone 8 (X) has it’s space, with Note 8, the premium segment gets split between the two,” Faisal Kawoosa, Principal Analyst, Telecom and ESDM, CMR, told IANS.

“With Samsung the only brand to reckon with in this top layer of the market segment, a lot of Android’s competition with iPhone banks on Samsung. So Google would be needing more of Samsung than vice versa,” he added.

According to Pathak, “We expect Apple and Samsung loyalists would still aspire to adopt these devices and it will remain to be seen if the high price would be somehow neutralised with clever marketing in terms of bundled offers.”

You will need to wait for few more days before you grab a Note 8. The device will be available in India in Midnight Black and Maple Gold colours, starting September 21.

Your iPhone will expire in three years, says Apple

Rooms will only be available for Private Online Events, and there is a limit of 50 people who can join the Room.
byIANS

Apart from India, Cashfree's products are used in eight other countries including the US, Canada, and the UAE.
byIANS