The UN has condemned the bombing of a Syrian refugee camp in Sarmada, a city 30 kilometers from Aleppo, in which dozens of civilians, including women and children, were allegedly killed or injured. A video has emerged showing the aftermath of attack.

Sarmada is located in Syria’s northwestern Idlib province close to the Turkish border and is said to be controlled by rebel factions fighting the government of President Bashar Assad. The makeshift camp that was targeted is said to have been accommodating up to 2,000 people that had fled the war-torn areas seeking safety.

While no party has claimed responsibility for what the reports have called an airstrike, White House spokesman Josh Earnest said at a press briefing that US-led coalition warplanes were not on a mission in the stricken area, while stressing that “there is no justifiable excuse for carrying out an air strike against innocent civilians who have already once fled their homes to escape violence.”

UN Under-Secretary-General for Humanitarian Affairs and Emergency Relief Coordinator Stephen O’Brien condemned the attack in astatement, while calling for an “immediate, impartial and independent investigation into this deadly incident.” According to the reports cited by O’Brien, at least 30 people fell victim to the air strikes that devastated two settlements, while over 80 people were injured. The Syrian Observatory for Human Rights had reported those numbers earlier.

If the deliberate nature of the attack is proven, the incident will “amount to a war crime,” the UN official added.

US State Department spokesman Mark Toner refused to immediately lay the blame for the attack on any party, including the Syrian armed forces, citing a lack of details concerning the incident. “We [U.S] don’t have eyes on the ground,” he stressed.

“We’ve seen early claims that this was a regime strike, but we just want to be absolutely sure before we level blame at somebody,” he told journalists at a press briefing on Thursday.

A video allegedly depicting the deserted Kamounia camp after the airstrike was posted on YouTube by the Syria Civil Defense group, which describes itself as a non-political humanitarian organization. The footage shows firefighters attempting to stifle a blaze amid debris remaining from the camp, while sheet-covered bodies were being carried to an ambulance. 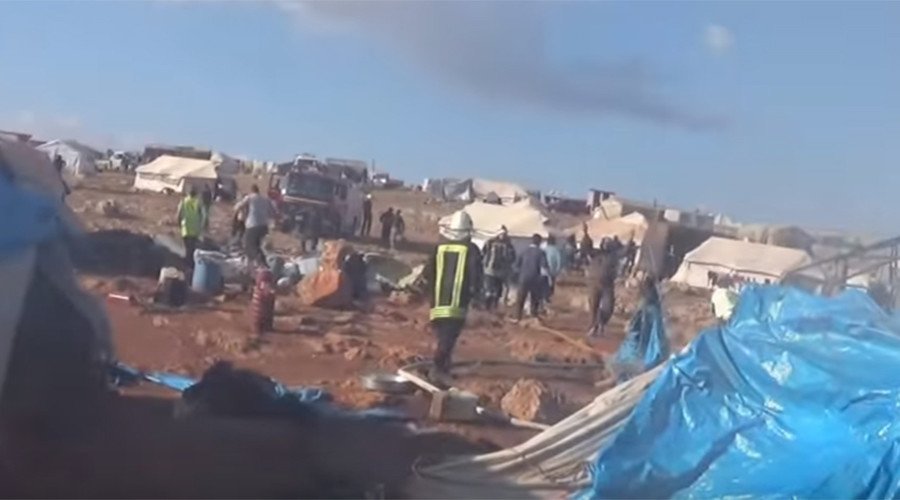 According to the group’s estimates, more than 30 people lost their lives in the bombing.

While there is no conclusive information on the perpetrator of the attack, UK Foreign Secretary Philip Hammond immediately rushed to blame the bombing on the Syrian government.

“The Assad regime’s contempt for efforts to restore the cessation of hostilities in Syria is clear for all to see,” he said in astatement, while describing the reports pertaining to the attack as “horrifying.”

The attack comes just a day after at least 12 people were killed and 45 injured in suicide blasts in the Syrian city of Homs.

Moscow and Washington confirmed on Wednesday that they had brokered a 48-hour ceasefire in Aleppo, which has been the scene of heavy fighting recently. The deal came into force on May 3 and should have been observed until 12 am on May 6.

Closing the summit late on Thursday evening, Satyarthi made a clarion call to action saying, "We don't have a choice but to act, and to act now."
byWeForNews Desk