New Delhi, Aug 24 (IANS) Hundreds of people from across the capital gathered at Delhi Secretariat on Friday to protest the “inaction” of Delhi government to form rules which would prevent deaths from starvation.

The protesters, led by the Delhi Rozi Roti Adhikar Abhiyan (DRRAA) NGO, held posters showing photographs of the three minor girls who died due to non-availability of food in east Delhi’s Mandawali neighbourhood.

Anjali Bhardwaj of the Delhi Rozi Roti Adhikar Abhiyan (DRRAA) said that the state government is responsible to conduct social audits and establish a “state food commission” so that all anganwadis and ration shops could be monitored. 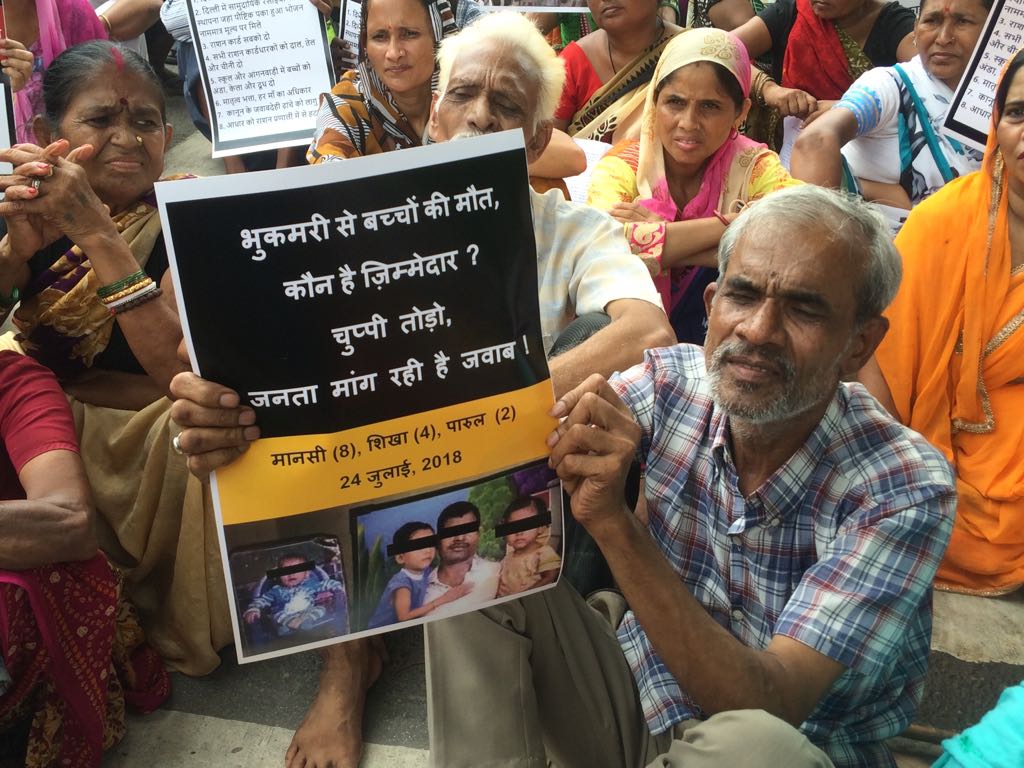 Protest at Delhi secretariat. One month ago, 3 girls died of starvation in Mandawali- no action by Delhi govt till now to prevent such deaths. No Rules for Food Security Act, no Food Commission, no social audits. Now 2.4 lakh ration cards cancelled without proper verification.

“Under the National Food Security Act, the Delhi government is responsible to form a state food commission which would cover issues like non-availability of food, improper ration shops and people not getting ration cards,” Bhardwaj, an advisor to the NGO told IANS.

But, she said, the government has not done anything to prevent deaths by starvation. “There are no rules under the food security act, no food commission, no social audits and on top of that, 2.9 lakh ration cards have been cancelled without proper verification,” she added.

The NGO also conducted a survey of 56 families in Mandawali on August 20 this year.

The survey revealed that 93 per cent of families in the area does not have ration cards, 41 per cent families say they are unable to afford adequate food and a family of seven said on many days they survive by only drinking black tea.

Bhardwaj said that the main reason these families did not have a ration card was that they “did not have the required documents or were not aware of the procedures.”

“This situation could have been avoided if the government had conducted any social audit,” she said.

Charitable educational institutions, charitable hospitals and special schools for children, which charge the same fees as government schools and hospitals, are given a 100 per cent exemption.

Gurugram: Property owners in Gurugram can lose their water and sewage connections if they fail to clear their property tax dues by October 31, officials of the Municipal Corporation of Gurugram (MCG) said on Wednesday.

According to the MCG officials, as per the notification issued by the Haryana government, only three days are left to avail the benefit of exemption in the payment of property tax issued by the MCG.

According to the notification, the government is giving an interest waiver and 25 per cent rebate to those paying their entire property tax dues by October 31.

“We have given a last opportunity to the property owners to pay their dues within the next three days. If they still do not pay their property tax, the process of cutting their sewer and drinking water connections will be initiated by the civic authority from November 1,” MCG Commissioner Vinay Pratap Singh said.

“A special drive to seal commercial buildings will be carried out and the process of auction can also be adopted by sealing the building,” he added.

As per the government notification, property owners who deposit their entire outstanding property tax by October 31 will be given a 25 per cent exemption on property tax from 2010-11 to 2016-17.

Charitable educational institutions, charitable hospitals and special schools for children, which charge the same fees as government schools and hospitals, are given a 100 per cent exemption.

The officials further informed that the civic body has also started an incentive scheme for all the resident welfare associations (RWAs) of the city. Municipal corporations will give an incentive amount of Rs 5 lakh to the RWAs which submit property tax of more than 80 per cent.

“The victim is not in a condition to record her statement. The statement of the victim will be taken only after clearance from the doctors, he said.

Gurugram : A 21-year-old woman, admitted at Fortis hospital in Sector-44 on October 21 due to breathing problems, was allegedly raped by a man when she was unconscious during the treatment from October 21 to 27.

The victim’s father reported the matter to the police on October 27 when she regained her consciousness and revealed her ordeal to her father.

She reportedly handed a three-page letter to her father and accused a man identified as Vikas.

Whether the accused is a hospital staff or not is yet to be known.

An FIR has been registered in connection with the incident at Sushant Lok police Station on Wednesday.

After receiving the complaint, the police rushed to the hospital to take the woman’s statement, but the doctors said that the woman was not in a condition to give the statement.

Deputy Commissioner of Police (east) Maqsood Ahmad said that the matter is being investigated. The record of the hospital, CCTV footage are being scanned.

“The victim is not in a condition to record her statement. The statement of the victim will be taken only after clearance from the doctors, he said.

“The case is being investigated. The parents of the woman do not even know whether the accused is an employee of hospital or not. We are also questioning the hospital management about the incident. The situation will be clear only after the woman gives her statement. Further investigation is on,” the DCP added.

According to the police the victim is a residen of Mahendragarh district and suffering from tuberculosis. Due to breathing problems, she was placed on a ventilator.

The victim’s urged the police to carry out a medical test of his daughter.

UP Woman Killed For Opposing Sexual Harassment Of Her Daughters: Police

Mansurpur police station SHO KP Singh said a case was registered against four people — Akash, Gopi, Binendra, and Rajesh — who are on run. A manhunt is on to catch hold of them.

Muzaffarnagar: A 55-year-old woman was allegedly beaten to death by four people for opposing their attempts of sexual harassment against her daughters at Nara village under Mansurpur police station in Muzaffarnagar, police said.

Mansurpur police station SHO KP Singh said a case was registered against four people — Akash, Gopi, Binendra, and Rajesh — who are on run. A manhunt is on to catch hold of them.

According to the complaint lodged by the family members, it is alleged that the four neighbours were harassing the young women of the family that was bitterly resisted by the mother.

On Monday evening, the four accused entered her house and attacked the woman identified as Sevti Devi (55). She was severely beaten up by the men. She was rushed to a nearby hospital where she was declared dead.

The body has been sent for a post-mortem.

Meanwhile, police raided the residences of all four accused to arrest them but they were not there.

A first in India: Critically endangered vultures introduced into wild

International Day of Girl Child: A look at five faces of girl power