President Pranab Mukherjee has been accorded the highest honour of Cote D’Ivoirie by its President Alassane Ouattara on his maiden visit to Abidjan.

After an elaborate reception accorded at the airport, Mr. Mukherjee attended a banquet last evening hosted by Ouattara where he was accorded with Grand Cross National Order of the Republic of Cote D’Ivoirie in a simple ceremony in the President’s Palace. 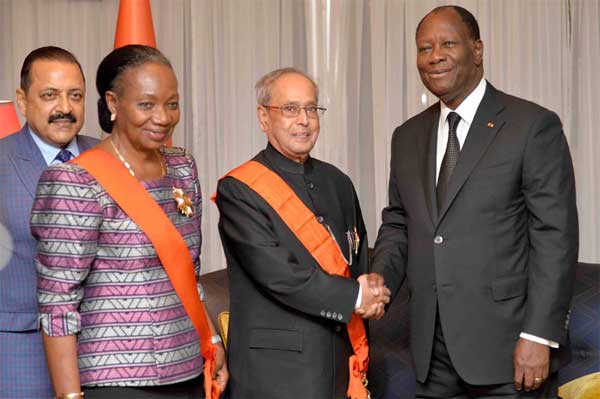 The President, Pranab Mukherjee at the banquet hosted in his honour by the President of the Republic of Cote d’Ivoire, Alassane Ouattara at Presidential Palace, in Abidjan on June 14, 2016. The Minister of State for Development of North Eastern Region (I/C), Youth Affairs and Sports (I/C), Prime Minister’s Office, Personnel, Public Grievances & Pensions, Atomic Energy and Space, Dr. Jitendra Singh is also seen.

President Pranab Mukherjee has been accorded the highest honour of Cote D’Ivoirie by its President Alassane Ouattara on his maiden visit to Abidjan.

After an elaborate reception accorded at the airport, Mr. Mukherjee attended a banquet last evening hosted by Ouattara where he was accorded with Grand Cross National Order of the Republic of Cote D’Ivoirie in a simple ceremony in the President’s Palace.

It is the first such honour accorded to Mr. Mukherjee, Press Secretary to the President Venu Rajamony said.

He said while Mr. Mukherjee has received number of honorary degrees, it is first such honour accorded to him by a country.

In his speech at the banquet, Mr. Mukherjee who is on the second leg of his three-nation visit to Africa, said it is rightly believed that the mutual goodwill between India and Cote D’Ivoirie is inversely proportional to the geographical distance separating the two countries, longstanding friendship and fruitful co-operation has made it irrelevant.

“I feel greatly honoured, Excellency, by your gesture of conferring on me the National Order of the Republic of Cote D’Ivoirie. I consider it to be emblematic of the long standing mutual friendship between the peoples of our two countries,” he said.

Calling for UN reforms, Mr. Mukherjee said both countries share many commonalities as both are active participants in regional and international fora and have worked together in close cooperation on matters of shared interest and concern.

“We both recognise the imperatives of strengthening the UN system and other international organisations. We would like to see them reformed that they remain relevant and effective in addressing the challenges that confront the world today. In this context, India stands ready to shoulder greater responsibilities in the specialised organs of the United Nations, particularly the UN Security Council,” he said.

He also underlined “common concerns” of both countries in the fight against international terrorism.

“We have been co-ordinating closely in regional and multilateral fora on this and other key issues including disarmament, climate change and sustainable development,” he said.

Mr. Mukherjee said India’s commitment continued in the form of South-South Cooperation through developmental assistance and sharing resources for the development of her brother nations in Africa.

The President said India’s public and private sector are keen to join Cote D’Ivoirie in setting up agro-based industries because of its fertile soil and agricultural and mineral resources.

“We would be happy to join your government in developing the infrastructure that you require in the different sectors of your growing economy. We have much to offer. At this time — when both our nations are growing at a rate of 7-9 per cent, there are infinite opportunities that must be seized,” Mr. Mukherjee said.

He appreciated the naming of an information technology park in Abidjan after Mahatma Gandhi calling him “a true son of India as well as Africa”.

“During his initial struggles in South Africa, he espoused the principles of Ahimsa (Non-Violence) and Satyagraha as tools for emancipation of the people from the exploitative and oppressive colonial rule.

These principles later inspired independent India’s efforts in support of the decolonisation of Africa in the 1950s and 1960s. It was also at the core of India’s solidarity in the anti-apartheid movement,” he said.

Mr. Mukherjee said India will remain a steadfast partner in assisting Cote D’Ivoirie in its economic development and growth. He said trade between the two nations is expected to touch USD 1 billion in the next few years.

“Given the relative size of our economies and our wide convergences in several sectors of common interests, we both agree that our trade and investment and economic co-operation does, indeed have a greater potential that is waiting to be fully realised,” he said.

Come January 1, landline users across India will need to prefix all calls to any mobile phone with a `0′ , with the Department of Telecommunications (DoT) calling on telcos to modify the dialing pattern for such calls in line with the sector regulator’s recommendations.

Kolkata: Come January 1, landline users across India will need to prefix all calls to any mobile phone with a `0′ , with the Department of Telecommunications (DoT) calling on telcos to modify the dialing pattern for such calls in line with the sector regulator’s recommendations.

The move is likely to create fresh numbering resources for mobile services amid the continuing rise in India’s mobile user base and the decline in wireline connections.

The DoT, in a circular, dated November 20, has backed the Telecom Regulatory Authority of India’s recommendations and mandated telcos to ensure all landline subscribers are “given a `0 dialing’ or STD facility” to be able to connect with mobile phones under the new calling system from next year.

National Milk Day was established in 2014 by the Food and Agriculture Organisation to commemorate Dr. Verghese Kurien, who is considered the father of India’s White Revolution.

Every year, National Milk Day is celebrated on November 26 across India. The largest milk producing country celebrates this day to demonstrate the importance of milk in everyone’s life. It is worth noting that National Milk Day and World Milk Day are two different events, observed on different dates with different significance.

National Milk Day was established in 2014 by the Food and Agriculture Organisation to commemorate Dr. Verghese Kurien, who is considered the father of India’s White Revolution.

Why is National Milk Day Celebrated?

National Milk Day is celebrated on November 26 all over India, and it was established by the Food and Agricultural Organisation in 2014.

The day is dedicated to honouring Dr. Verghese Kurien, who is considered to be the father of India’s White Revolution. November 26 is also his birth anniversary, which is why this day is even more important as it also highlights his contribution to the country’s dairy farming and production.

The Indian Dairy Association (IDA) in 2014, took the initiative to celebrate this day for the first time. The first National Milk Day was marked on November 26, 2014, in which various milk producers from 22 states participated.

Kerala-born, Dr Verghese Kurien is known as the ‘Milkman of India’ and the father of the 1970s White Revolution. He came with the one billion litre idea of turning a milk-guzzling country into world’s top dairy producer.

Milk is one of the best sources of calcium and the only drink in the world that contains such a large amount of natural nutrients.

Dr Verghese worked towards enabling the country to have its own production centres of milk. His support was crucial in making the Amul girl ad campaign-which is one of the longest-running campaigns for decades.

Amazon quiz Answers Today, November 25, 2020: The Amazon Quiz for November 25, 2020, is live and today you have the chance to Win Rs 5000 Pay Balance. The trivia quiz gives a chance to users across the country to win exciting gifts every day by answering a set of simple questions.

After giving the right answers to the questions users can win mobile phones, other gadgets, and Amazon Pay Balance. E-commerce giant Amazon never disappoints its users and today’s gift is special for all the online shopping lovers.

Q1- Char-chaporis are shifting riverine islands of the Brahmaputra located in which Indian state?
Ans- Assam
Q2- In 2020, who became the first bowler to pick up a wicket off the first ball in an IPL final?
Ans- Trent Boult
Q3- Alu, Bittu and Sattu are characters in which recent Rajkummar Rao movie?
Ans- Ludo
Q4- These objects are used to do what kind of activity?
Ans- Surfing
Q5- In which city also known as the ‘Blue City’ is this picture taken?
Ans- Jodhpur

1. Download the Amazon India App from Google Play Stores or Android App
2. Sign up or log in to your Amazon account
3. Once login you can check the homepage banner of the App click on Amazon Quiz for today.
4. Start playing the Amazon quiz contest.

Where to find the latest answers for Amazon Quiz?

You can find all the right Answers for Amazon Quiz here. With Amazon Quiz you can win various exciting prizes. Choose the right answers for the Amazon daily quiz and you can be the lucky winner. The Amazon Quiz contest is live at 8:00 AM and it ends at 12:00 PM.

Joe Biden declares his administration ‘ready to lead the world’

I have lost a comrade, colleague and friend: Sonia on Ahmed Patel’s death

Global availability of Covid vaccine for public only by mid-2021: Moody’s

Ahead of DDC polls, BJP targets Abdullahs over ‘land grab’