A powerful earthquake with a preliminary magnitude of 6.4 struck southern Japan on Thursday evening, collapsing walls and a number of houses. There are no immediate reports of casualties. 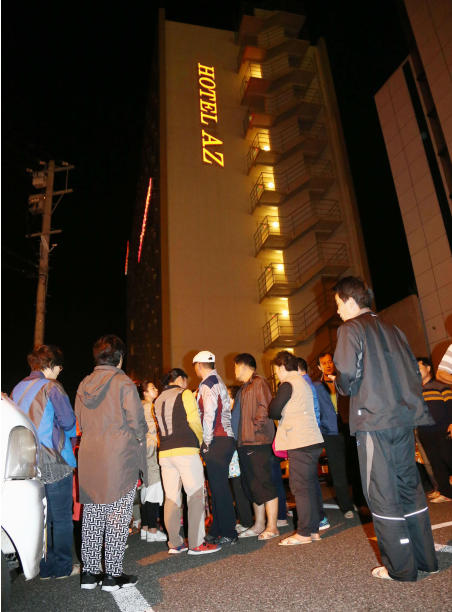 Chief Cabinet Secretary Yoshihide Suga told a news conference that damage was being assessed. A number of houses have collapsed, but there was no abnormality at nearby nuclear facilities, Suga said.

“There was a ka-boom and the whole house violently shook sideways,” Takahiko Morita, a resident in Mashiki, a town at the epicenter, told a telephone interview with NHK TV. “Furniture and bookshelves fell down, books were all over the floor.”

Morita said there is no power outage in his neighbourhood but water supply was cut off. Some houses and walls collapsed, he said.

Keisukei Urata, an official at nearby Uki city, said he was driving home when the quake struck at 9:26 p.m.

He also said he saw some walls around houses collapsing.

Parts of the ceiling at Uki City Hall also collapsed, windows were broken and cabinets fell to the ground, he said.

Kasumi Nakamura, an official in the village of Nishihara near the epicenter, said that the rattling started modestly and grew violent, lasting about 30 seconds.

“Papers, files, flower vases and everything fell on the floor,” he told NHK. He said there were aftershocks.

One aftershock measuring 5.7 struck about 40 minutes later, according to Japan’s Meteorological Agency.

The U.S. Geological Survey put the quake’s preliminary magnitude at 6.2 and said it was 23 kilometers (14 miles) deep. It said there’s a low likelihood of casualties but some damage is possible.

Footage on NHK showed a signboard hanging from the ceiling at its local bureau violently shaking. File cabinets rattled, books, files and papers rained down to the floor, and one employee appeared to have fallen off a chair, while others slid underneath their desks to protect their heads.

WASHINGTON, Aug. 15 : US President Donald Trump on Friday pushed for more COVID-19 relief to households and small businesses after congressional lawmakers left Washington D.C. with no deal in sight.

“I have directed the Secretary of the Treasury to get ready and send direct payments of $3400 for a family of four to all Americans, Democrats are holding this up,” Trump said at a press conference, adding he is also ready to send more money to help small businesses hurt by the pandemic, and state and local governments.

Asked by reporters whether he would take unilateral action on these issues or wait for the legislative package, Trump responded: “I’m waiting for the Democrats to approve it, okay?”

Both chambers of Congress have left for their August recesses and are not expected to return until September unless they strike a COVID-19 relief deal.

Negotiations between Democratic leaders and White House officials collapsed last week, with both sides blaming each other for making little progress on the much-needed relief package.

In an attempt to circumvent Congress, Trump last Saturday signed a series of executive orders to extend certain COVID-19 economic relief, but they are unlikely to provide a meaningful boost to the overall economy.

“A closer look at these orders suggests they will have at best marginal economic benefits even if fully implemented, which is questionable given the legality of the orders and the likely court challenges,” Mark Zandi, chief economist of Moody’s Analytics, wrote in an analysis earlier this week.

Zandi estimated that these orders could provide just over 400 billion U.S. dollars in total relief, but the U.S. economy needs a fiscal aid package costing at least 1.5 trillion dollars to avoid falling back into recession, based on simulations of Moody’s macroeconomic model.

After rebounding strongly in May and June, U.S. economic activity has begun to slow since July as some states have paused their reopening plans or re-imposed restrictions on some activities due to the resurgence of COVID-19 cases.

“The resurgence in COVID-19 cases and subsequent pullback in activity have already begun. Delays to aid by Congress will exacerbate the slowdown in August,” said Diane Swonk, chief economist at Grant Thornton, a major accounting firm.

GAZA/RAMALLAH, Aug. 14 : Hundreds of Palestinians demonstrated in the West Bank and Gaza on Friday against the United States’ sponsored normalization agreement between Israel and the United Arab Emirates (UAE).

The Islamic Jihad Movement and other Palestinian factions organized the demonstration in Gaza city. Leaders of the factions, including the Hamas movement, joined the protest.

The crowds went out from al-Omari main mosque in Gaza city, waving flags and chanting slogans against the UAE. They marched the main street and gathered at Palestine square in the city’s downtown.

They carried banners writing “Palestine is not for sale” “No for normalization and no for those who lead normalization with the occupation” and “normalization is a knife in the back of the Palestinian people.”

Member of the Islamic Jihad Movement’s political bureau Khaled Al-Batsh renewed the Palestinian people’s condemnation and rejection of the agreement, calling on the UAE to withdraw its recognition of Israel immediately.

Hamas movement leader Mushir al-Masri addressed during the demonstration on behalf of the other factions’ leaders that the Palestinian people described the declaration of the agreement as “a black day for our people and cause.”

“The agreement is a total betrayal of the Palestinian cause and an unpardonable diplomatic action that no one forgives. It is a stab in the back of the Palestinians and gives free services to the occupation,” al-Masri said.

If the United States allowed the coronavirus to spread unchecked in an attempt to try to achieve so-called herd immunity, the “death toll would be enormous,” Anthony Fauci, U.S. top infectious disease expert, warned.

WASHINGTON, Aug. 14 : A new ensemble forecast published by the U.S. Centers for Disease Control and Prevention (CDC) has projected up to 200,000 total COVID-19 deaths in the United States by Sept. 5.

“State- and territory-level ensemble forecasts predict that the number of reported new deaths per week may increase over the next four weeks in Colorado and may decrease in Arizona, the Northern Mariana Islands, Vermont, and Wyoming,” the CDC said on its forecasting website.

If the United States allowed the coronavirus to spread unchecked in an attempt to try to achieve so-called herd immunity, the “death toll would be enormous,” Anthony Fauci, director of the U.S. National Institute of Allergy and Infectious Diseases, warned on Thursday.

“If everyone contracted it, even with the relatively high percentage of people without symptoms … a lot of people are going to die,” Fauci said during a live Instagram session.

“Testing continues to fall, especially in the South, one of the areas where the country needs it the most. Cases, too, are falling, which remains hard to interpret, given the testing decline — but fewer people are now in the hospital with COVID-19 than last week,” said a new report of The COVID Tracking Project.

This is the second week in a row that hospitalizations seem to have dropped, which suggests that infections may be declining independently of testing reductions, according to the report.

The number of COVID-19 cases in the United States topped 5.29 million as of Friday afternoon with more than 168,100 deaths, according to a tally by Johns Hopkins University.

A dog’s blood line: Facts you need to know

Dawood takes back seat as another Don hits headlines in Karachi

Riteish to birthday girl Genelia: Growing young with you is a blessing

BRICS one of the most valuable and working partnership: Javadeker