Thiruvananthapuram, July 12 (IANS/Mongabay) Starting late July, the Anamalai hills near Munnar in Kerala will be resplendent, clad in a purplish blue carpet. The famed neelakurinji (Strobilanthes kunthiana) will burst into flower – a phenomenon that occurs once in 12 years. Hundreds of thousands of visitors are expected to flock to the Munnar hills to behold the spectacle that lasts up until October.

Munnar is home to the highest concentration of neelakurinji plants in the country – spread over 3,000 hectares of rolling hills. Each shrub reproduces once in its life time and dies after flowering. It takes another 12 years for the seeds to sprout again and grow up to 30 to 60 centimetres high, for another glorious bloom.

The neelakurinji belongs to the genus Strobilanthes, which is a tropical plant species found in Asia and Australia. There are about 450 species of Strobilanthes in the world, of which 146 are found in India and of them, about 43, in Kerala. 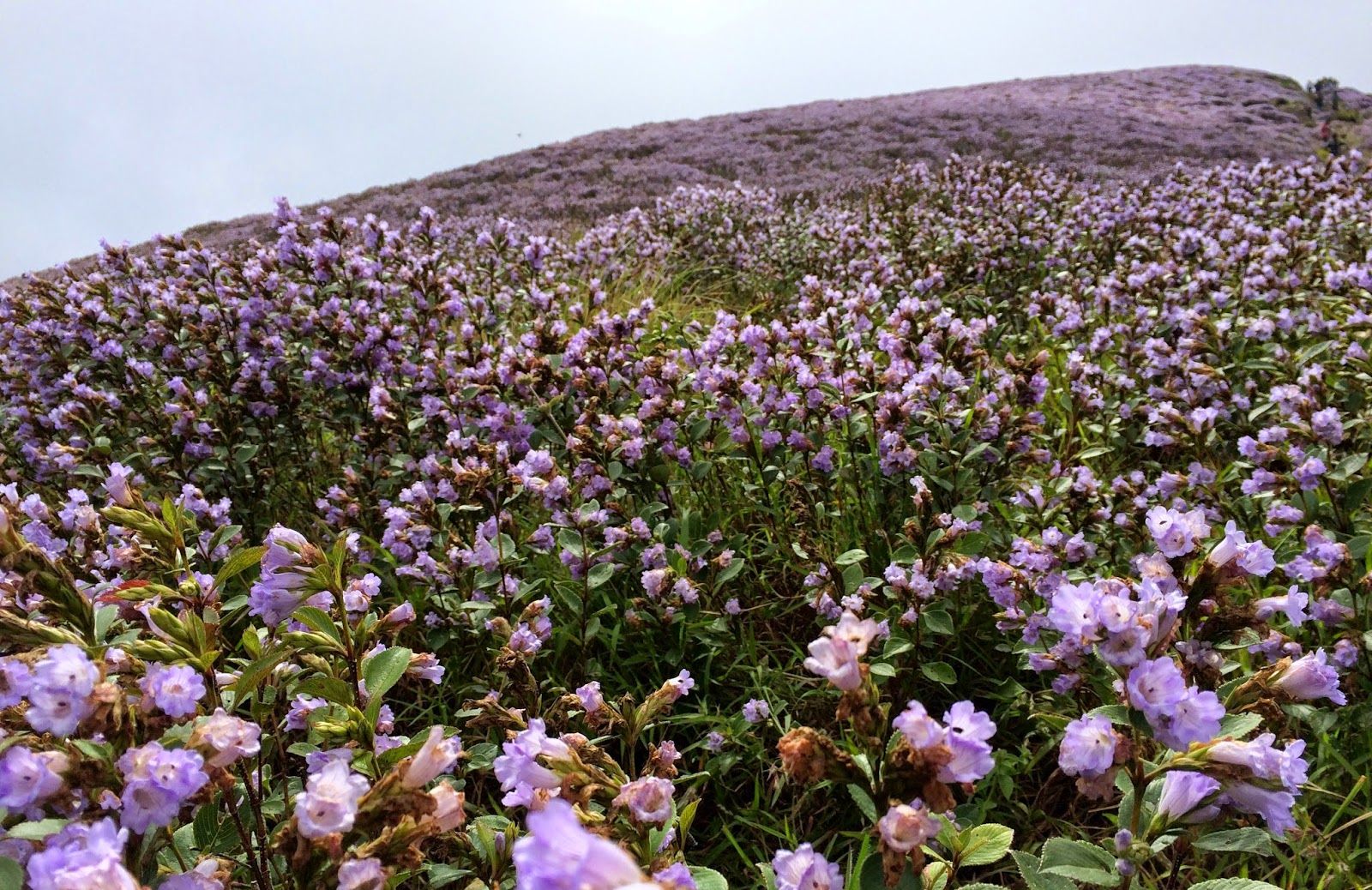 The blooming of neelakurunji this year has ensured the fourth most important place for the Western Ghats in the Lonely Planet’s 2018 Best in Asia.

The mass flowering neelakurinji provides a feast for butterflies, honeybees and other insects. The purple flowers hold a large amount of nectar, which especially attract the eastern honeybee (Apis cerana).

“This honey from the neelakurinji is very special. It lasts for about 15 years without getting spoilt,” said G. Rajkumar, chief coordinator of the NGO Save Kurinji Campaign Council. He added that the honey is supposed to have medicinal properties.

Rajkumar also said that the ecosystem that supports the kurinji plants plays a major role in bringing water to the Amaravati river which is a tributary of the Kaveri river, a main water source for Tamil Nadu. “The Kurinji reserve is in the catchment area of Amaravati river,” he said.

The forest department expects a large number of tourists to arrive in Munnar during this season, said Lekshmi Rajeshwari, forest range officer at Devikulam, which is part of the Eravikulam National Park, the prime destination where neelakurinji will bloom.

“One million tourists, including travellers from Europe and the United States, are expected to visit this amazing place this year,” she said.

Last October, Kerala Chief Minister Pinarayi Vijayan had communicated through a social media post that around eight lakh (0.8 million) tourists are expected for the bloom season and the state government aims to introduce a series of measures to protect the Eravikulam National Park. As an unprecedented number of tourists will visit the region, the government plans to restrict the numbers entering the park and the amount of time they spend there, said Vijayan’s post. Action on waste management and required tourist facilities are to be in place to safeguard the national park.

Encroachment on the neelakuri habitats

The Kurinjimala Sanctuary was declared in 2006, during the previous mass flowering to protecting the neelakurinji and its habitat. “This sanctuary gives the rarest, most spectacular view of neelakurinji,” said G. Baburaj, an environmentalist. “But it is eyed by many,” he added, elaborating that the area is being encroached on by resorts, hotels, plantations and small farms. 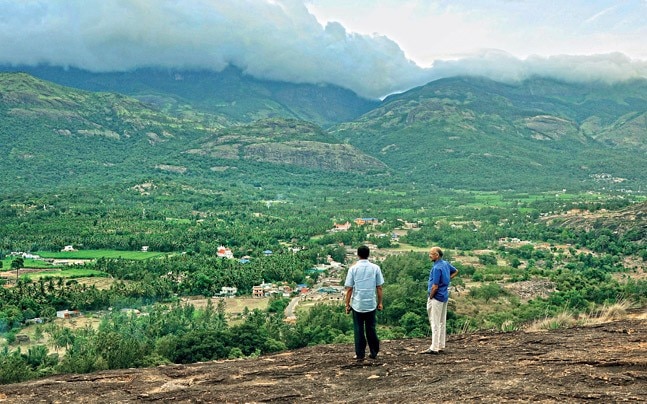 Pic, (HT) An encroached plot in Munnar; (inset) the kurinji in bloom.

To put an end to the encroachments, the Kerala government passed an ordinance in 2006, for protecting the Kurinjimala Sanctuary. Since a number of settlements came under the area in the sanctuary, which was raising a stir among locals, the government, in the ordinance, authorised a sub-collector to adjudicate land claims after hearing complaints.

The proposed land that came under this ordinance included 2,041 houses, more than 53 government offices, 12 schools, 62 temples, churches and even banks. There were allegations against local politicians for forging title deeds of land ownership in the areas declared as protected.

However, for Kurinjimala to be declared as a wildlife sanctuary permanently under the Wildlife Protection Act of 1972, there is need for the settlement officer (in this case the Devikulam sub-collector) to go through the settlement of rights process for those who have inhabited or have rights over the land. This has now happened.

In November 2017, the Kerala Government decided to redraw the boundaries of the Kurinjimala Sanctuary – a move which had invited criticism alleging that it was to support the encroachers.

Following the controversy, Pinarayi Vijayan had promised that the reserve’s area will not be reduced at any cost. He told media representatives that a committee will be formed to study the issues at the reserve and it will look in to the settlement concerns.

There is also a case pending in the Kerala High Court, demanding a Central Bureau of Investigation (CBI) enquiry into the involvement of the local member of Parliament in fabricating documents for the land. Similarly, there are hundreds of such encroachments in the reserve, claims environmentalist G. Baburaj.

Now, in the latest decision as of April 2018, the Kerala cabinet has decided to ensure that the proposed Neelakurinji Sanctuary will have a minimum of 3,200 hectares. Though the cabinet had decided not to evict people with title deeds, it plans to redraw the boundaries in cooperation with the revenue department.

The cabinet decision includes appointing a settlement officer, conducting drone-based survey to identify the forest land and amending The Kerala Promotion of Tree Growth In Non-Forest Areas Act 2005 to prevent growing acacia and eucalyptus in the reserve forest area, all meant to benefit the Kurinjimala Sanctuary.

(In arrangement with Mongabay.com, a source for environmental news reporting and analysis. The views expressed in the article are those of Mongabay.com. Feedback: [email protected])

BJP must clarify they believe in Hindu Rashtra or ‘secular republic’ : Tharoor

With 86,052 new cases in the last 24 hours, India’s coronavirus cases are nearing six million-mark, according to the health ministry updates shared on Friday.

India’s Covid-19 recovery rate stands at 81.74 per cent and the mortality rate remains below 1.6 per cent, according to government figures.

In a positive development, Wednesday was the sixth consecutive day when the number of people recovered in the country was more than the total number of cases detected in the 24-hours period.

In the last few days, India has seen a significant drop in daily cases, but there needs to be more evidence to suggest whether the nation has surpassed the virus’s peak or not.

Maharashtra continues to be India’s worst-hit state with nearly 300,000 active cases and a death toll of 34,345.

Meanwhile, Delhi Chief Minister Arvind Kejriwal on Thursday said he had been told by experts that the second wave of Covid-19 in the national capital has peaked.

Globally, the United States is the worst-hit country with over 7 million cases and 200,000 deaths.

New Delhi, Sep 25 (IANS) The Election Commission of India is set to announce the dates for the Bihar Assembly polls on Friday, official sources said.

A press conference is scheduled to be held at 12.30 pm at the Vigyan Bhavan in this regard, the EC spokesperson Sheyphali Saran said.

Due to Covid protocols, only journalists accredited with the PIB would be allowed to attend the presser.

Bihar has 243 Assembly seats. In 2015, the alliance of the Rashtriya Janata Dal, Janata Dal-United and the Congress had swept the polls but JD-U has since aligned with the BJP.

Earlier this month, the EC said that the Assembly elections will be completed before November 29, the date on which the tenure of the present Assembly ends.

The EC also said that by-elections to 65 seats in different states will also be held simultaneously.

The EC has already issued the guidelines to all political parties to help prevent the spread of Covid-19.

Earlier, the EC had asked political parties for their opinions on the conduct of Assemblly elections.

The RJD, LJP and some others had suggested postponement of the electoral battle until the coronavirus pandemic was over. However, the ruling JD-U, BJP and others wanted the elections to be completed before the Assembly’s term ended.

Security forces and terrorists have engaged in a massive encounter in Sirhama in Jammu and Kashmir’s Anantnag district. As per preliminary reports, heavy exchange of fire has been reported from the area where the encounter broke out last night.

The Kashmir Zone Police has said that two Lashkar-e-Taiba terrorists have been killed in the encounter.

“Incriminating material, including arms and ammunition, have been recovered. A search operation is currently underway,” the police said.

Former Indian shot putter charged with murder of wife, mother in US

Social distancing norms flouted during a ‘Kalash Yatra’ in Indore

“Promise Was To End Corona In 21 Days, Ended Jobs Instead”: Rahul Gandhi

Sonia Gandhi Speech on Indira Gandhi Prize for Peace, Disarmament and Development for 2019

Kangana to Sanjay Raut: I have complete freedom of expression