As the leaders of China and the United States sit down for a summit on Thursday, North Korea has made sure it also has something on the negotiating table: A nuclear-tipped bargaining chip.

North Korea launched a projectile on Wednesday, which U.S. officials said appeared to be a liquid-fueled, extended-range Scud missile that only traveled a fraction of its range before spinning out of control and crashing into the sea.

The launch was North Korea’s latest in a long series of missile and nuclear tests that have accelerated in their variation and intensity over the last two years.

As the leaders of China and the United States sit down for a summit on Thursday, North Korea has made sure it also has something on the negotiating table: A nuclear-tipped bargaining chip.

And now, experts agree, North Korea is closing in on the ability to hit the United States with a missile, a goal that for decades has been the subject of Pyongyang’s vivid propaganda posters.

“They’ve been able to put a nuke on a missile for a while now,” said Jeffrey Lewis of the California-based Middlebury Institute of International Studies.

“The stated purpose of the last test was to validate the nuclear weapon design that would arm all of North Korea’s missiles,” Lewis said of North Korea’s September 2016 nuclear test – its fifth and largest to date.

Since then, North Korea has further ramped up its tests and rhetoric, emphasizing a consistent message: To create a nuclear device small enough to mount on an intercontinental ballistic missile (ICBM), and fire it at the United States.

“If we push the button, the bombs will be fired and reduce the U.S. to ashes,” an editorial in the ruling Workers’ Party newspaper the Rodong Sinmun said on Wednesday. 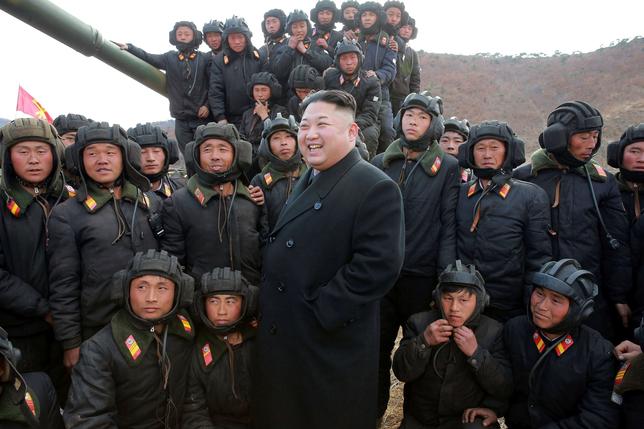 North Korea now has the strength to “wipe out” the United States “in a moment” with an H-bomb, the editorial said.

“This is again our warning”.

“The first few tests might fail, but that’s not good news because they’ll learn,” said Lewis. “How long it takes to make it work is anyone’s guess. Maybe a couple of years, maybe the first time”.

North Korea has been pursuing its nuclear and missile programs at an unprecedented pace since last year, with an aim to expand its deterrence against Washington and diversify its line-up of nuclear-equipped missiles, another expert said.

“They have been doing so many test launches last year and this year to develop systems to transport nuclear warheads,” said Kim Dong-yub, a professor at Kyungnam University’s Institute of Far Eastern Studies in Seoul.

“The whole thing is about expanding their deterrence and continuing to keep upgrading their missiles to deliver nuclear warheads,” said Kim.

It was not clear if Wednesday’s launch was deliberately timed to coincide with Thursday’s summit between China’s President Xi Jinping and U.S. President Donald Trump in Florida, where North Korea is expected to be a prime topic of discussions.

Some experts think North Korea has tried to make sure the two world leaders are aware Pyongyang has a bargaining chip in any forthcoming moves to clam down on its weapons programs.

Cheong Seong-chang, a senior research fellow at Sejong Institute outside Seoul, said that could come in the form of another nuclear or ICBM test after the summit. Perhaps first with a low-level show of force – enough not to upset China – followed by a period of intensified weapons testing.

“Then, next month when a new (South Korean) government gets under way, North Korea is expected to try to turn the situation around into a phase of appeasement and, use its moratorium of nuclear and ballistic missile tests to find middle ground with South Korea and the United States,” Cheong said.

This year, North Korea officials, including young leader Kim Jong Un, have repeatedly indicated an ICBM test, or something similar, could be coming, possibly as soon as April 15, the 105th birthday of North Korea’s founding president and celebrated annually as “the Day of the Sun”.

Trump, China’s Xi dine ahead of talks on security, trade

He also informed Putin that France’s own analysis had confirmed Germany’s conclusion that Navalny was poisoned by Novichok “in contravention of international norms on using chemical weapons”.

French President Emmanuel Macron on Monday urged his Russian counterpart Vladimir Putin to urgently shed light on the “attempted murder” of opposition figure Alexei Navalny after French tests confirmed the use of the Novichok nerve agent, the Elysée said.

Macron told Putin in telephone talks that it is “imperative that all light be shed, without delay, on the circumstances of this attempted murder and who is responsible”, the French presidency said in a statement.

He also informed Putin that France’s own analysis had confirmed Germany’s conclusion that Navalny was poisoned by Novichok “in contravention of international norms on using chemical weapons”.

Putin, for his part, told Macron that it was “inappropriate” to make groundless accusations against Russia over the suspected poisoning of Navalny, the Kremlin said.

The Russian leader said his country wanted Germany to hand over medical test results taken from Navalny, according to a Kremlin readout of the call.

Russian prison service said he was detained for multiple violations of parole and terms of a suspended prison sentence.

Russian opposition leader Alexei Navalny was detained at a Moscow airport after returning from Germany on Sunday, the prison service said.

The prison service said he was detained for multiple violations of parole and terms of a suspended prison sentence and would be held in custody until a court makes a decision in his case.

Mr. Navalny, who is President Vladimir Putin’s most prominent and determined foe, had spent the previous five months in Germany recovering from a nerve agent attack that he blamed on the Kremlin.

Mr. Navalny decided to leave Berlin of his own free will and wasn’t under any apparent pressure to leave from Germany.

The prison service made the announcement after the flight carrying Mr. Navalny landed in the Russian capital, though at a different airport than had been scheduled. It was a possible attempt to outwit journalists and supporters who wanted to witness Mr. Navalny’s return.

After boarding the Moscow flight in Berlin on Sunday, Mr. Navalny said of the prospect of arrest: “It’s impossible; I’m an innocent man.”

The Kremlin has repeatedly denied a role in the opposition leader’s poisoning.

“For at least 28 hours, I walked around with it (facial paralysis),” one person who had the side effect told Ynet.

Jerusalem, Jan 17 : At least 13 Israelis suffered mild facial paralysis as a side effect after receiving the first Covid vaccine jabs, the Health Ministry said, adding that the count could be higher.

The officials have raised questions on whether or not to administer the second dose to these individuals the Health Ministry had recommended for the second dose, reported the Jerusalem Post.

“For at least 28 hours, I walked around with it (facial paralysis),” one person who had the side effect told Ynet.

“I can’t say it was completely gone afterwards, but other than that I had no other pains, except a minor pain where the injection was, but there was nothing beyond that.”

As for receiving the second dose, he admits he is undecided, but says that “it is important to note that this is something rare, and I don’t want people to avoid getting vaccinated – it’s important”.

“I recently came across, for example, someone vaccinated who was dealing with paralysis, and decided not to give her a second dose,” Galia Rahav, Director of the Infectious Diseases Unit at Sheba Medical Centre told Ynet.

“It is true that it can be given according to the Health Ministry, but I did not feel comfortable with it.”

She added that, “No one knows if this is connected to the vaccine or not. That’s why I would refrain from giving a second dose to someone who suffered from paralysis after the first dose.”

However, the Health Ministry has assured of the second dose only when the paralysis passes, Ynet reported.

We will not quarrel, but celebrate R-Day: Farmer leader Rakesh Tikait

Rajini’s party members are ‘free’ to join any outfit