A Muslim couple who accused Delta Air Lines of Islamophobia for throwing them off a flight have spoken of their ordeal for the first time.

They said they were singled out because flight crew had noticed them “sweating” and saying the word “Allah”, which they denied.

Faisal Ali and Nazia Ali were waiting for about 45 minutes on a Delta Air Lines flight in Paris to fly back to Cincinnati, Ohio when a Delta employee asked the couple to exit the aircraft as he needed to ask them questions.

“We asked if we should get our stuff and he said, ‘Yes, take all of your stuff as you won’t be on that flight’,” Ms Ali told The Independent. “That was really alarming.”

After interrogating them about their stay in Paris – the couple had been enjoying a brief holiday in the capital city for their 10th wedding anniversary – the officer said he had no problem with them and there was nothing else he could ask the couple.

The Delta employee then explained that the pilot had decided to ask them to leave as one of the crew members had felt “uncomfortable” in their presence, as the crew member had reportedly seen Mr Ali hide his phone as they walked by, and that Mr Ali had been sweating and saying “Allah”. 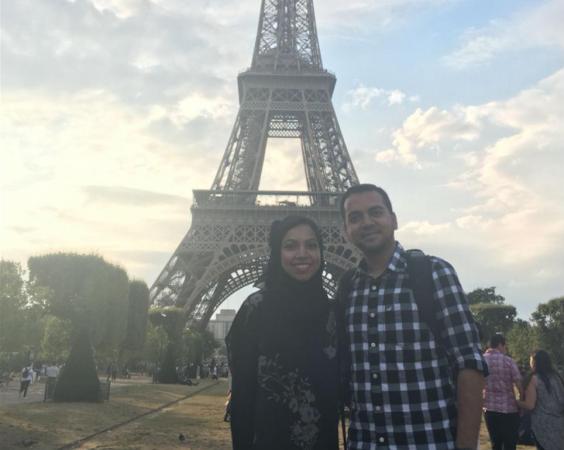 The couple enjoyed their holiday seeing the sights in Paris

Mr Ali said he had been texting his mother to let her know they had safely boarded the plane as she would be picking them up from Cincinnati airport.

“I wanted to get on that plane so badly. I didn’t care about my privacy, I just wanted the captain to see my phone so he could see we were just texting our parents,” she said.

Her husband added he might have been sweating due to poor air circulation on the plane as it had been on the tarmac for about 45 minutes.

The couple, who have three young children under the age of five, were booked into a hotel by the airline overnight.

“I told my four year old that you’ll see me tomorrow, in another nine hours,” she said. “But that didn’t happen.”

The children were being looked after by the couple’s parents. 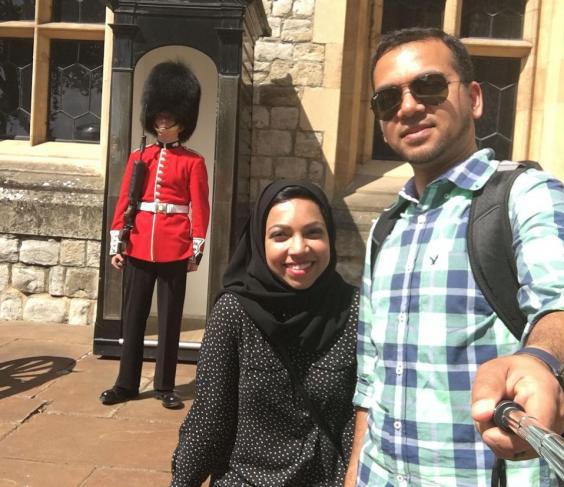 The first stop on their anniversary was London (Nazia Ali)

The couple was interrogated again by a US customs agent at the airport the next day.

When Mr Ali asked what they had done wrong, the agent said: “You have done nothing wrong, unfortunately this is the way the world is right now. It is Delta’s word against yours.”

They finally boarded the plane and Ms Ali said she still felt scared.

“We now know that just because you’re on the flight doesn’t mean you won’t be asked to leave – until you’re airborne,” she said.

The Council of American-Islamic Relations has filed a complaint against the airline and said that the couple had been discriminated against.

“By falsely construing their simple and normal actions into something scary and threatening, it is clear that Mr and Mrs Ali were being singled out due to their Muslim appearance and name,” wrote staff lawyer Sana Hassan.

Delta Air Lines spokesman Morgan Durrant responded: “Delta condemns discrimination toward our customers in regards to age, race, nationality, religion, sexual orientation or gender.  As a global airline that brings hundreds of thousands of people together every day, Delta is deeply committed to treating all of our customers with respect.  Delta continues its investigation into this matter and will issue a full refund of these customers’ airfare.”

Media reports on Sunday claimed that spyware Pegasus was used to conduct surveillance on about 300 Indians, including ministers, political leaders, government officials and journalists.
byWeForNews Desk

Last week, local Israeli media reported that the White House is planning a “giant” sale of F-35 warplanes as part of the deal.
byIANS