Nandita Das’ film on the subcontinent’s greatest short story writer, Saadat Hasan Manto, brought alive memories of days when it was fashionable to be on the Left. That is where all the progressive writers were — Ali Sardar Jafri, Kaifi Azmi, Ismat Chugtai, Sahir Ludhianvi, Krishen Chander, Rajinder Singh Bedi, Majrooh Sultanpuri, the lot.

The Pied Piper who lured them to Bombay (Mumbai) was the innovative Secretary General of the Communist Party of India (CPI), P.C. Joshi. As part of the trend, actors like Balraj Sahni gave a boost to the Indian Peoples’ Theatre Association. Socialism even in Raj Kapoor films was influenced by the ambience that this lot had generated. They determined the character of Bollywood by their lyrics, dialogue and sheer presence. Subsequently, the influence disappeared but not totally. Witness Nandita Das.

At one level, Manto’s uncompromising realism sustains the tension throughout the film because it clashes with the dogmatic idealism of his colleagues. Das assembles many of them and their friends in cinema, Ashok Kumar, Shyam (Chaddha) in the first Independence Day party where the legendary Jaddan Bai regales the gathering. The teenage girl behind her mother Jaddan Bai is unmistakably Nargis. It is superb casting. The way Manto protects Ashok Kumar through a mob of Muslim rioters is unbelievably realistic. His parting with his closest friend, the handsome actor Shyam, because of Partition, is rich in poignancy.

The Partition of India is replete with many tragic ironies but tragedies pale before the incident that Manto picks on as a metaphor for the mayhem: Toba Tek Singh.

When the newly formed governments of the two countries complete the identification of Hindus and Sikhs in Pakistan’s mental asylum and Muslims left in such institutions in India, the governments decided to transfer them to the countries they were now deemed to be citizens of. 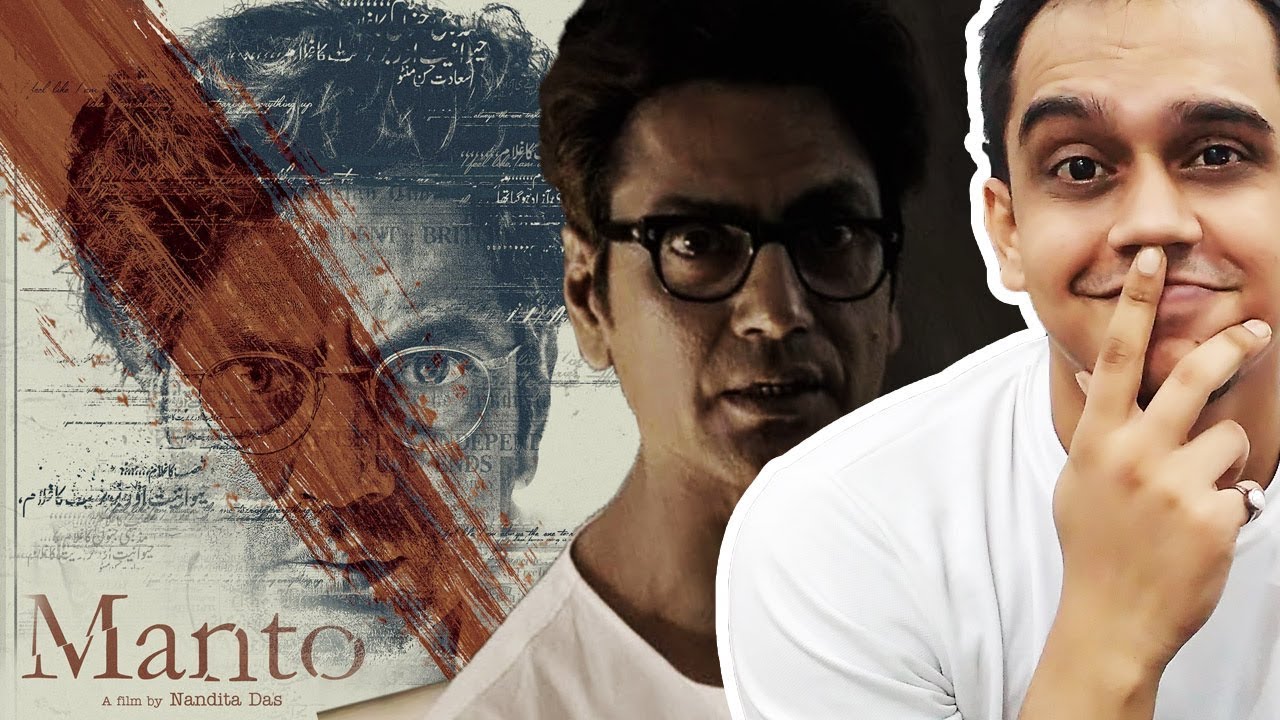 When Bishan Singh, a Sikh in a Pakistan asylum, is being transferred to India under police escort he learns that his hometown, Toba Tek Singh, has been left in Pakistan. Bishan Singh begins to walk in the opposite direction. The last scene shows him lying in no-man’s land. Let Manto end the story in his own words: “There, behind the barbed wire, on one side, lay India and behind more barbed wire, on the other side, lay Pakistan. In between on a bit of earth, which had no name, lay Toba Tek Singh.” This is just one of the Manto stories Nandita Das weaves effortlessly into her film.

“Thanda Gosht” or “Cold Meat”, a controversial masterpiece, becomes one of the film’s supporting columns. It provides occasion for a court drama where Manto defends himself against charges of obscenity. Faiz Ahmad Faiz as a witness in the case exposes the earliest fissures in the Progressive Writers Movement. In his testimony, Faiz describes “Thanda Gosht” as not the “highest form of literature” but clearly not obscene either.

The backdrop, once again, are the riots following Partition, the cataclysm Manto could never wrench himself away from. A well built Sikh, Ishwar Singh, has returned after joining the looters. In fact, he has even murdered five men with his kirpan (sword). But when he is unable to make love to the passionate Kalwant Kaur, she, in a moment of suspicion and jealousy, slits his throat with the very same kripan, demanding that he tell her who he has slept with.

The story’s final climax is — it has many — when a dying Ishwar Singh confesses: Yes, he lifted a “very beautiful girl” from a house, but when he laid her down, he realized to his horror…she was dead, “Thanda Gosht”.

An effort to critique Nandita Das’s film has involuntarily meandered past the brilliant short stories which many readers must already be familiar with. There is a simple reason for my diversion. The succinct, vivid, picturisation of so many of the stories have made them more intimately accessible. Those who have read Manto will be enriched. The selection of stories is uncanny.

When a doctor asks his helper to “open” (khol do) the window to allow some light, Sakina (recovered from a riot-affected area) gropes for the string of her shalwar in a daze and loosens it. She has developed a Pavlovian response to the sound “khol do”, so repeatedly has she been raped in captivity. There is a disturbing, Mantovian irony attending the end. On this occasion, the instruction “khol do” is for the window to be opened so that Sakina’s distraught father, who has spent days searching for her, can see her face. I can go on and on.

The extraordinary directorial success lies in what Nandita Das has avoided. Despite the world’s finest short stories at her disposal, she has refrained from creating a catalogue of Manto masterpieces, however seductive the idea may have been. The stories are in the service of the director’s primary purpose: To bring out the multilayered life of a genius, struggling to keep the wolf from the door, a difficult proposition when tight-fisted publishers buy a short story only for Rs 20 against Manto’s demand for Rs 50. He accepts the humiliation because he is in desperate need for money for his child’s medical treatment.

To be proud, sensitive and constantly in need is a lethal combination. Initially, when Manto copes with the humiliation, he reminds me of Majaz Lucknowi.

Eventually, on a cold December night, Majaz was found in a coma on the terrace of a Lucknow country liquor shop. He died the next morning in Balrampur hospital, surrounded by comrades who happened to be in Lucknow for a Conference of Progressive Writers — Ismat Chugtai, Sardar Jafri, Sahir Ludhianvi. Manto also dies of alcoholism but his is a slow end, by attrition. Both died in their 40s.

The film’s other attraction is the portrayal of an era along a distinct track — post-Partition mayhem, breakdown of friendships, relationships, Manto’s parting from Bombay deliberately preserving a one rupee debt to a cigarette seller as a “precious” link with the city he loved.

(Saeed Naqvi is a commentator on political and diplomatic affairs. The views expressed are personal. He can be reached on [email protected])

Suhana is very much active on her Instagram page and often shares her photos flaunting her impeccable makeup skills and incredible fashion sense.

Shah Rukh Khan’s daughter Suhana Khan addressed the trolls who have been commenting on her post about her skin tone. The star kid posted a beautiful photo of herself and then a series of comments she has been receiving from Instagram users calling her ‘kaali’. Before that, Suhana posted a note which read as “For all the people who don’t speak Hindi, I just thought I’d give a bit of context. The word for the colour black in Hindi is ‘Kaala’. The word ‘kaali’ is used to describe a female who is dark-skinned. And it almost never has positive connotations.”

The 20-year-old started by writing, “There’s a lot going on right now and this is one of the issues we need to fix!! this isn’t just about me, it’s about every young girl/boy who has grown up feeling inferior for absolutely no reason. Here are just a few of the comments made about my appearance. I’ve been told I’m ugly because of my skin tone, by full-grown men and women, since I was 12 years old.”

Suhana further wrote, “Other than the fact that these are actual adults, what’s sad is that we are all Indian, which automatically makes us brown – yes we come in different shades but no matter how much you try to distance yourself from the melanin, you just can’t. Hating on your own people just means that you are painfully insecure.”

Suhana is very much active on her Instagram page and often shares her photos flaunting her impeccable makeup skills and incredible fashion sense.

Celebrated filmmaker Shekhar Kapur, 74, has been appointed president of the Film and Television Institute of India (FTII) Society which runs the prestigious film school in Pune, people familiar with the matter said on Tuesday.

Kapur, who is known for movies from the Indian superhero film ‘Mr India’ to ‘Bandit Queen’ based on the incidents in the life of Phoolan Devi and an acclaimed biopic on Queen Elizabeth, will hold the post till March 3, 2023.

According to a person aware of the developments, the ministry of information and broadcasting has also appointed Kapur as the chairperson of the FTII governing council.

Kapur will head the premier film school at a time when, like many other colleges and universities, it is also grappling with the challenges posed by Covid-19.

The FTII had earlier declared the results of the entrance test and is planning the future course. Online classes and training courses have been continuing.

“Wherever it is difficult for students to attend classes, the institute has been putting up the material on the website,” said the person cited above.

Information and Broadcasting minister Prakash Javadekar said “Kapur, who has a vast experience, will add more value to the Institute. I am sure everybody will welcome his appointment”.

“Shekhar Kapur, as a reputed film maker of international stature, is without doubt an excellent choice. FTII welcomes him as its Chairman. It’s come a full circle from Dev Anand who started his career working at Prabhat Studio within the campus of FTII today, to his nephew Shekhar Kapur as Chairman of FTII,” said Bhupendra Kainthola, Director, FTII.

The previous FTII chief was BP Singh known for his role as the lead actor in tele-serial CID. Singh was recently appointed by the Indian Council for Cultural Relations (ICCR) to its general assembly.

The Film and Television Institute of India was set up by the Centre in 1960 in the premises of the erstwhile Prabhat Studios in Pune. It conducts various film related courses including on acting, direction, sound recording, editing and cinematography.

The ministry of information and broadcasting announced Kapur as the new President of FTII Society and Chairman of FTII Governing Council, FTII director Bhupendra Kainthola said.

An official on Tuesday said that prominent filmmaker Shekhar Kapur has been appointed as the president of the Pune-based Film and Television Institute of India (FTII) society and chairman of the institute’s governing council.

The ministry of information and broadcasting announced Kapur as the new President of FTII Society and Chairman of FTII Governing Council, FTII director Bhupendra Kainthola said.

He has received numerous awards for his work in the field of cinema including Padma Shri in 2000 and the Golden Globe Award in 1998.

Nearly 10,000 children may die of hunger every month: WHO chief

Farm laws are like a dagger through your hearts: Rahul Gandhi to farmers