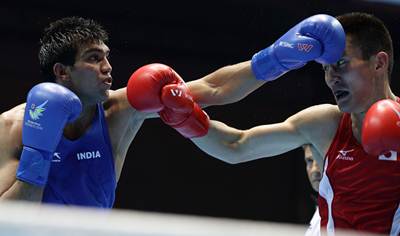 Haryana pugilist Manoj thrashed Tajikistan’s Rakhimov Shavkatdzhon 3-0, while Vikas got the better of Lee Dongyun of Korea by a similar margin.

Manoj will face European champion Pat McCormack of Britain while Vikas is up against Turkmenistan’s Achilov Arslanbek, who beat Italy’s Cavallaro Salvatore, in Friday’s semi-finals.

With Manoj and Vikas qualifying, India will have three boxers participating at the coming Olympics, Shiva Thapa (56kg) having made the cut during the Asian Qualifying Tournament in China in March.

“Given the terrible state in which boxing is right now, I am relieved to have qualified for the Games. There was lot of pressure on the team which is competing here and I am glad that came good,” Manoj said.

“I am immensely thankful to the coaches, the Sports Ministry, the national coaching staff, the Sports Authority of India and my personal coach Rajesh, who is also my elder brother. Their efforts have helped me pull it off,” he added.

“Manoj dominated all three rounds and boxed intelligently to win and qualify for the Games,” Sandhu said.

“Vikas was similarly commanding in his performance and sailed past his opponent,” he added.

Vikas, however, is a doubtful starter in Friday’s semi-finals after sustaining a cut on his face.

Manoj, also a former Asian Championships bronze medallist, and Vikas, who won gold at the 16th Asian Games in Guangzhou, competed in the 2012 London Games and lost in the quarter-finals.

The Green Park stadium in Kanpur is set to host the test matches between India and New Zealand.…
byAnjali Kesarwani