RJD chief Lalu Yadav who is in jail in connection with three fodder scams was not present for the engagement ceremony.

The ceremony was held at the five-star Hotel Maurya in Patna, with Lalu’s wife and former CM Rabri Devi overseeing the arrangements. 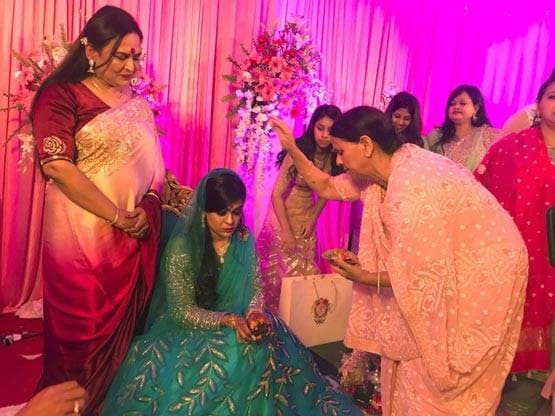 The ceremony was attended by close family members and relatives including Pratap’s sister and RJD Rajya Sabha MP Misa Bharti and his brother and the Leader of Opposition Tejashwi Yadav. Aishwarya completed her higher secondary education from Patna and then completed MBA from Amity University in Noida. Tej Pratap formally joined politics ahead of the 2015 Bihar Assembly polls and represents the Mahua Assembly.

For the wedding, which is likely to take place next month here, Lalu Prasad is expected to seek judicial permission to attend it.

Mumbai, Jan 30: The Congress on Tuesday staged a protest against the rise in prices of petrol and diesel at…
byAnushruti Singh
49 shares
49
0
0

On the third day of Monsoon Session of Parliament, Rajya Sabha faces brief adjournments on the issue of…
byShivangi Raghav

Reacting to the Budget, Congress leader and former CM Kamal Nath described it as 'a pack of lies'.
byIANS