New Delhi, Aug 4 (IANS) In a show of opposition unity against the ruling NDA, Congress President Rahul Gandhi on Saturday led a protest demonstration against the rape of 34 minors in a government-funded shelter home in Bihar, alleging that weaker sections were under attack by the Narendra Modi government and now it would be the BJP-RSS ideology versus the rest of India.

“On one side it is the RSS-BJP ideology and on the other the rest of India,” Gandhi thundered in his brief address to the gathering of hundreds of people at Jantar Mantar in the heart of the capital that brought leaders of various parties including RJD leader Tejashwi Yadav, Delhi Chief Minister Arvind Kejriwal, CPI-M General Secretary Sitaram Yechury, CPI leader D. Raja and rebel JD-U leader Sharad Yadav on one platform. 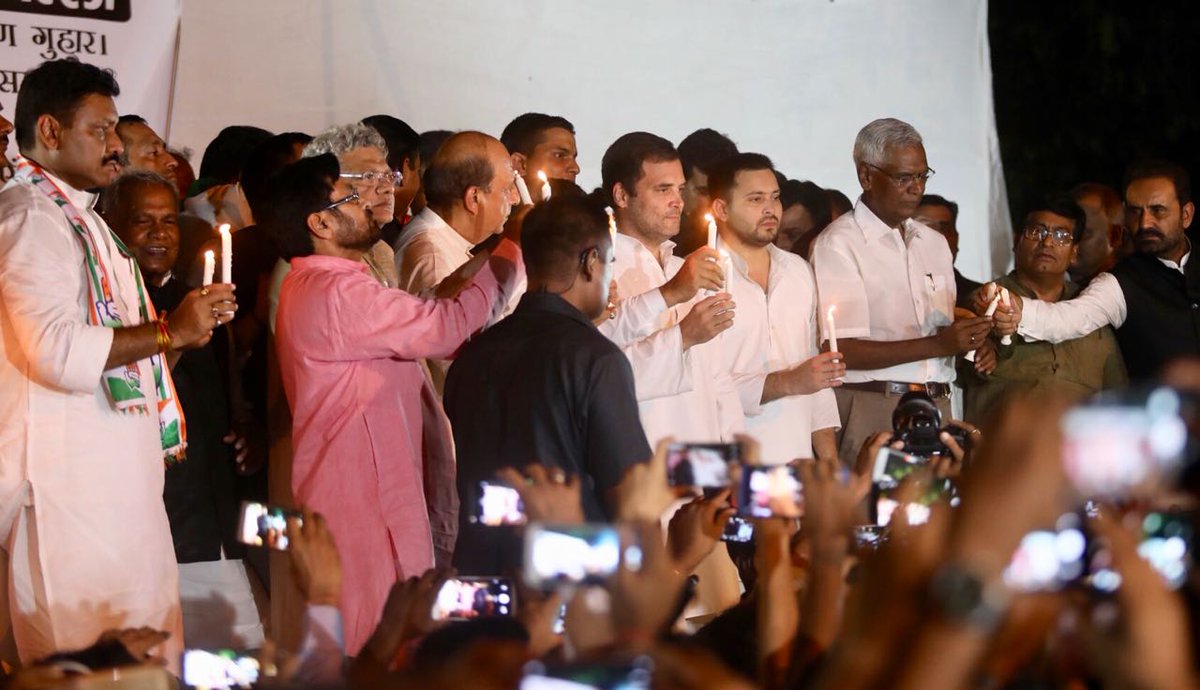 “You see how the opposition stands united here. India stands united while the BJP and RSS stand on the other side. It will be more visible very soon. India is saying that whatever happened in the last four years was not good… There were attacks on the Indian culture. But when Indians make up their mind, no one stands a chance against them.”

We have gathered here today to show the people of India, the women and the weaker sections, that we stand by them and shall not back down: Congress President @RahulGandhi at the protest at Jantar Mantar, Delhi. pic.twitter.com/A3Wn2LHqg9

Gandhi said oppressed and weaker sections of the society were being assaulted openly in the country.

“Be it women, labourers, tribals, farmers, Dalits or minorities. Everyone is under the attack. But we are standing united here to tell them that we are with you, we are with the women of India.”

The joint demonstration to protest against the rape of 34 minor girls in a shelter home in Muzaffarpur district was organized by Leader of the Opposition in Bihar Assembly Tejashwi Yadav, who said “as a Bihari, I feel ashamed that there is complete lawlessness in Bihar” as minors, who needed shelter, were being raped “right under the nose of the government”.

The RJD jailed leader Lalu Prasad’s son and former Deputy Chief Minister noted that the “heinous crime” was a sign of government’s “failure” to protect women and oppressed. 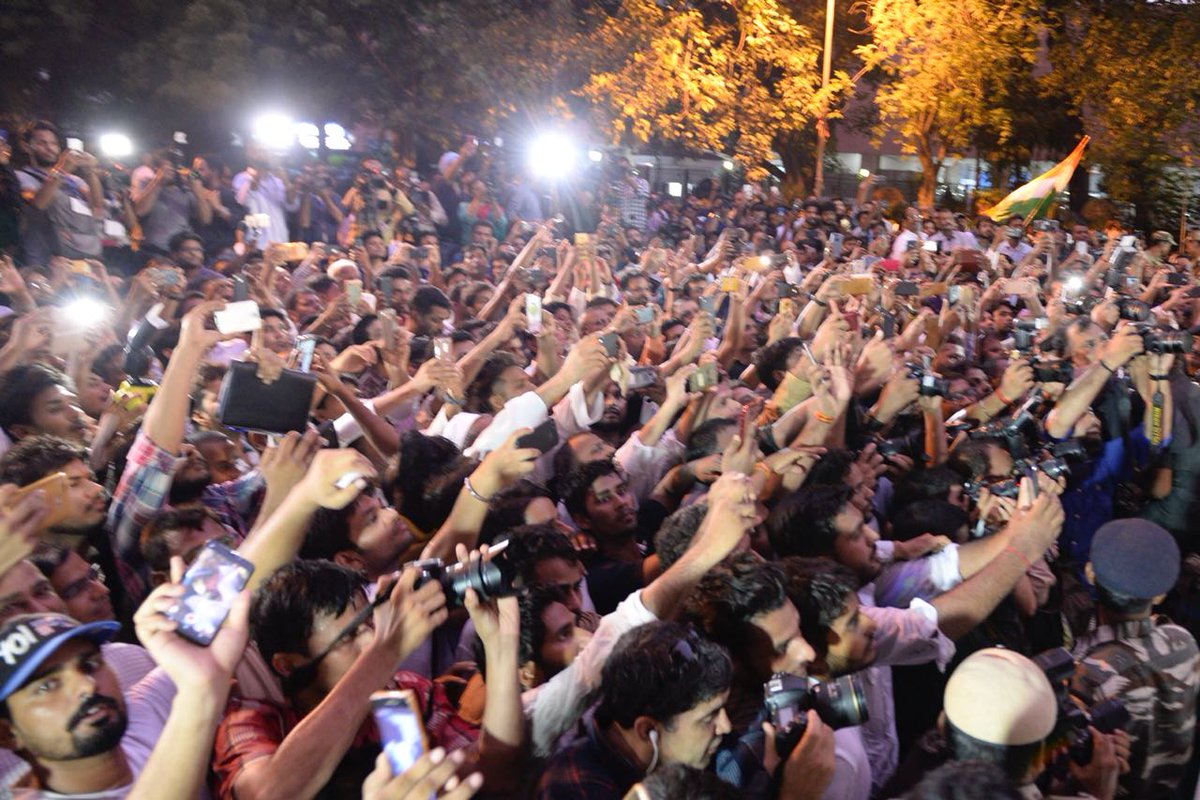 “In 2013, Brajesh Thakur (the main accused) joined the JD-U. Nitish Kumar should clarify on this. The Chief Minister has even visited Thakur’s residence. The public is watching. I want to ask the people, will they choose the leader who has maintained silence on this issue? The ‘rakshas raj’ (demon’s rule) is back in Bihar.”

He said there was no news of the victims who had now been shifted to another shelter home in Madhubani being run by an aide of one Sanjay Jha “who is a close aide of Chief Minister Nitish Kumar”.

Kejriwal alleged that “no action was taken” even when the Bihar government was alerted by some NGOs that all was not right.

“Children were being raped and government funds kept pouring in. Those who provide sanctuary to the accused are even bigger culprits… I want to warn them. Nirbhaya was raped and the UPA government was rocked. This time there are 40 such Nirbhayas (in Bihar),” the Aam Aadmi Party chief said.

Trinamool Congress’ Dinesh Trivedi said it was shameful that “India’s introduction is given in terms of incidents of rapes”.

Yechury said there was no other remedy to this than capital punishment for the culprits.

“The slogan has now changed to ‘BJP se beti bachao’. I haven’t seen such inhumanity ever before… All this anarchy which we are seeing today, cannot have happened without the shelter of the BJP… We have to remove these parties from power from Centre and state.”

Raja said Nitish Kumar should not continue as the Bihar Chief Minister after the “horrific and barbaric” rape of minors in Muzaffarpur.

“He has no moral right to continue. I also wish to question Prime Minister Narendra Modi about what is happening to our daughters. The Prime Minister should ask Nitish Kumar to act. It’s a shame. The fight is for justice. The CPI is with Bihar and Tejashwi.”

Addressing a press conference, he said: I want to make two points in the context of what happened in the Rajya Sabha… I want to ask if there was any quorum or not… 5 to 7 people asked for division in front of me, but nobody paid heed.

New Delhi: The Congress, which is protesting against the farm Bills passed by the Parliament, has chalked out a detailed programme of agitation, which will begin on September 26 with an online “Speak up for Farmers” campaign.

The party has also set up a “Save Farmer and Labour” committee.

On September 28, the party will organise a march from the Rajghat to the Raj Bhavan, and on October 2, the party will burn the effigy of Prime Minister Narendra Modi in each assembly segment. A signature campaign will be held from October 2 to October 31, while a state-level farmers’ convention will be organised on October 10.

“BJP’s anti-farmer Bills ensure the profitability of a few in exchange of the prosperity of our farmers. These Bills are a direct attack on the backbone of our nation,” Congress spokesperson Abhishek Singhvi said on Thursday.

Addressing a press conference, he said: “I want to make two points in the context of what happened in the Rajya Sabha… I want to ask if there was any quorum or not… 5 to 7 people asked for division in front of me, but nobody paid heed.”

The bill was passed by the Rajya Sabha amid an uproar by opposition members that led to eight of them being suspended from the House.

“There is no mention of MSP, no criteria for pricing… despite that you are tricking the nation by saying that we have not removed MSP,” Singhvi said.

New Delhi: The Congress hit out at the Modi government Thursday after Delhi police named its leaders Salman Khurshid and Udit Raj in a charge sheet filed in the February riot cases, saying it will “neither cow down nor bow down before authoritarianism”. “The FIR against Salman Khurshid, Udit Raj and others reflects the mortal fear and cowardice of the Modi government. These are men and women of proven track record and of stellar service to the nation. Not surprising that a narcissist government gets insecure of voices of dissent,” Congress chief spokesperson Randeep Surjewala tweeted.

The Delhi police charge sheet has said Khurshid and Raj were among politicians who gave provocative speeches during the protests against the Citizenship Amendment Act (CAA). Police have referred to former Congress Councillor Ishrat Jahan and a protected witness and said they told them about the speeches in their disclosure statements. The charge sheet said the protected witness stated in the statement, recorded under CrPC Section 161 (examination by police), that several big names such as Raj, Khurshid, CPM leader Brinda Karat had come to the Khureji protest site and gave “provocative speech”.

“Whether in the Parliament or the restless streets of India, the Modi government subjugates, suppresses and suffocates dialogue and discussion. PM Modi detests such democratic principles. Let it be remembered – we’ll neither cow down nor bow down before authoritarianism,” Surjewala added in a second tweet. Other Congress leaders too voiced their disapproval at their colleagues finding a mention in the charge sheet. Ahmed Patel said it is “shameful” that the BJP government is “falsely harassing” senior politicians like Khurshid, CPM general secretary Sitaram Yechuri and others.

Yechury, Swaraj Abhiyan leader Yogendra Yadav, economist Jayati Ghosh and Delhi University professor Apoorvanand were named in a supplementary charge sheet filed recently in the riot cases for “provoking and mobilizing” anti-CAA protesters. “These leaders have an impeccable record of fostering communal harmony, the Delhi police’s charges are not only wrong but also laughable,” Patel said in a tweet.

Jairam Ramesh tweeted, “A former Foreign Minister and Law Minister, Salman Khurshid is amongst the nicest, gentlest, learned, nationalistic, secular Indians I have known, and he figures in a chargesheet! It is a SHAME on the Delhi Police and its true and two masters.” Communal clashes had broken out in northeast Delhi on February 24 after violence between citizenship law supporters and protesters spiralled out of control, leaving at least 53 people dead and around 200 injured.

“The BJP government is in a way setting up an East India Company in the country by diluting farm and labour laws and protecting capitalists,” NCP spokesperson Mahesh Tapase said.

Mumbai: Sharad Pawar’s Nationalist Congress Party (NCP) today hit out at the Centre over the passage of farm sector and labour reform bills, accusing it of being a “government of capitalists”.

The bills were passed in a hurried manner, said NCP spokesperson Mahesh Tapase.

“The Centre has again proved it is a government of capitalists and not of common people,” he alleged.

“The BJP government is in a way setting up an East India Company in the country by diluting farm and labour laws and protecting capitalists,” he added.

The farm sector laws do not clearly mention minimum support prices and that is why the farmers in northern states are protesting against these reforms, Mr Tapase said.

“The NCP is completely with farmers. (NCP chief Sharad) Pawar himself has said so,” he added.

On labour reforms, the NCP spokesperson said the Union government was bringing in the “hire and fire” work culture of the West.

Talking about Bihar Director General of Police Gupteshwar Pandey opting for voluntary retirement, Mr Tapase said the Election Commission and Department of Personnel and Training should make a two-year cooling off period compulsory before former officials can join politics.

“Such officials can join politics after their cooling-off period is over,” Mr Tapase said.

He also demanded that the Centre disburse to Maharashtra its Goods and Services Tax share of ₹ 22,000 crore.

WHO Board to get 1st update from Covid panel on Oct 5-6, report next year

Former Indian shot putter charged with murder of wife, mother in US

Social distancing norms flouted during a ‘Kalash Yatra’ in Indore

“Promise Was To End Corona In 21 Days, Ended Jobs Instead”: Rahul Gandhi

Sonia Gandhi Speech on Indira Gandhi Prize for Peace, Disarmament and Development for 2019

Kangana to Sanjay Raut: I have complete freedom of expression