Israel PM showcases love for B-town, as the pictures says it all

Mumbai, Jan 19: Recreating the viral ‘Oscar selfie’, which featured several Hollywood stars in one picture, Israeli Prime Minister Benjamin Netanyahu, on Thursday night, posed with Bollywood actors as a sign of the “great friendship” between India and Israel.

PM Netanyahu: "I'd like the Bollywood stars who are here tonight and the directors and the producers to join me right now for a selfie. Please come on stage, let's all have this photo so a few hundred million people can see the great friendship between our two countries" ???? pic.twitter.com/BAXgEcLhDY

The rise of Bollywood is part of the rise of India as a global power, and this coincides with the rise of Israel as a global technological power. And this innovation is not only in IT, or in agriculture, or in medicine, or in space, or in cyber. It's also in the arts. pic.twitter.com/NtJbmjPCvN 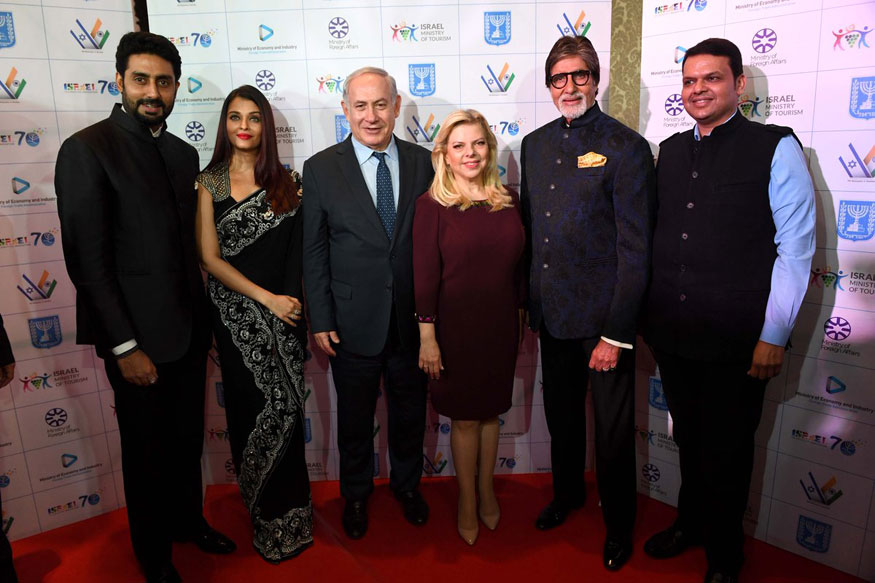 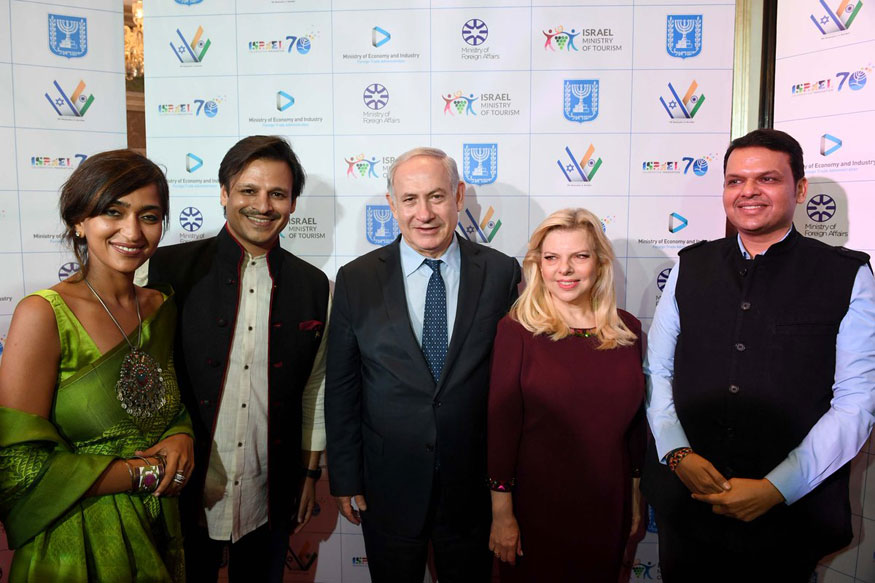 Karan tweeted a series of photographs of himself with Netanyahu, saying: “A complete honour and privilege to meet with the honourable Prime Minister of Israel Benjamin Netanyahu… Such a wonderful evening with friends of the fraternity.”

A complete honor and privilege to meet with the honourable Prime Minister of Israel @netanyahu ….such a wonderful evening with friends of the fratenity…. pic.twitter.com/Ig2tmm9NAc

Bhandarkar said it was “great attending presentation on history, culture and geodiversity of Israel along with film fraternity and had a pleasure interacting with Honorable Prime Minister of Israel Netanyahu and the first lady.”

It was great attending presentation on history, culture and geodiversity of #Isarel along with film fraternity and had a pleasure interacting with Hon. PM of #Israel @netanyahu and the first lady.? #ShalomBollywood #Mumbai pic.twitter.com/0aRwQQRD3M

Vivek said it was an “incredible pleasure” to meet Netanyahu, who welcomed Bollywood to feature Israel’s natural beauty in its movies.

“You are an amazing ambassador for Israel, you won our hearts! Looking forward to visiting your beautiful country and experiencing the rich Israeli culture very soon,” Vivek tweeted.

What an incredible pleasure it was meeting you sir! You are an amazing ambassador for Israel, you won our hearts today! Looking fwd to visiting your beautiful country and experiencing the rich Israeli culture very soon! @netanyahu @IsraeliPM #NetanyahuInIndia pic.twitter.com/7Rff4JLpaK

Ghai was touched by the “delightful scene” when Netanyahu invited celebrities for a selfie and Amitabh helped him to take the selfie.

It was a delightful scene when prime minister of Israel Netanyahu invited celebrities of hindi cinema on stage for a selfie n @SrBachchan helped him to take selfie at Israel cultural summit to promote Israel for film shootings n allied ventures. A pleasant evening indeed ? pic.twitter.com/SWFqHclnOZ

“A pleasant evening indeed,” he said, adding that he was glad Amitabh did not use the term Bollywood while welcoming Netanyahu.

On Netanyahu’s wish, the celebrities posed for an Oscar-like selfie.

He signed off the memorable Shalom Bollywood event with a “Jai Hind, Jai Maharashtra, Jai Israel”.

Mumbai, Sep 10: Bollywood’s versatile actor Rajkummar Rao, who is riding high on the success of his recently…
byAsha Rai
1 share
1
0
0