Mumbai, May 17: Mumbai Indians kept their play-offs hopes alive as the hosts edged past Kings XI Punjab by three runs in an Indian Premier League (IPL) match here on Wednesday. 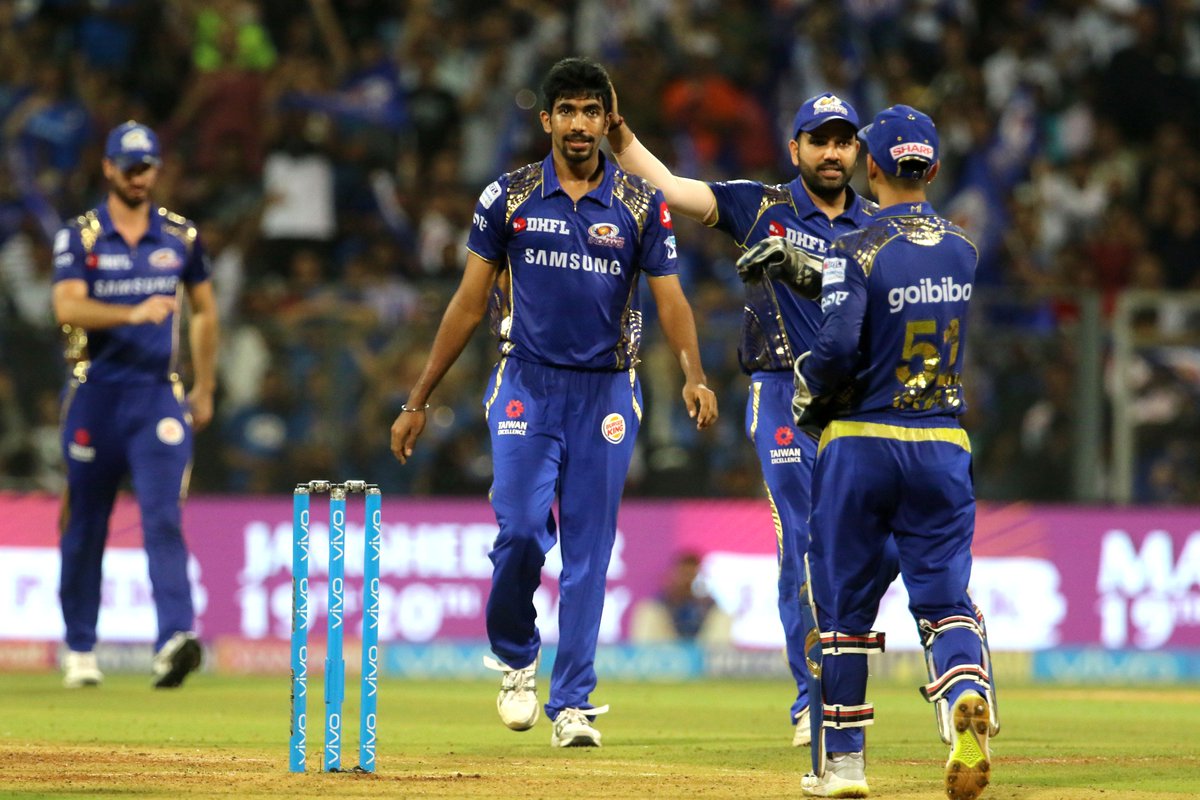 With this victory, Mumbai are now sitting at fourth spot with 12 points while Punjab slipped to sixth spot.

Chasing 187, openers Lokesh Rahul (94) and Chris Gayle (18) provided a steady start, scoring 34 runs in four overs. But Gayle was departed in the same over by pacer Mitchell McClenaghan.

Aaron Finch (46) and Rahul then forged a crucial 111-run partnership. The duo slammed Punjab bowlers all around the park and also played some beautifully crafted shots. 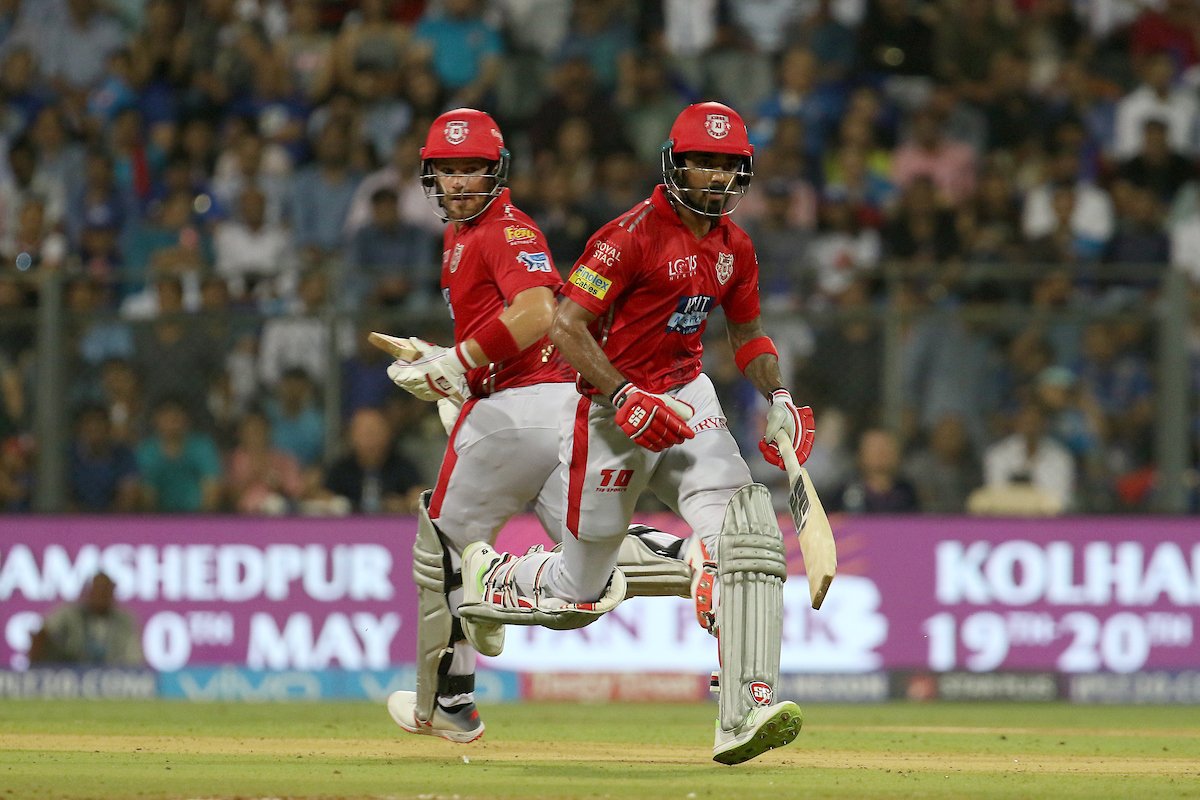 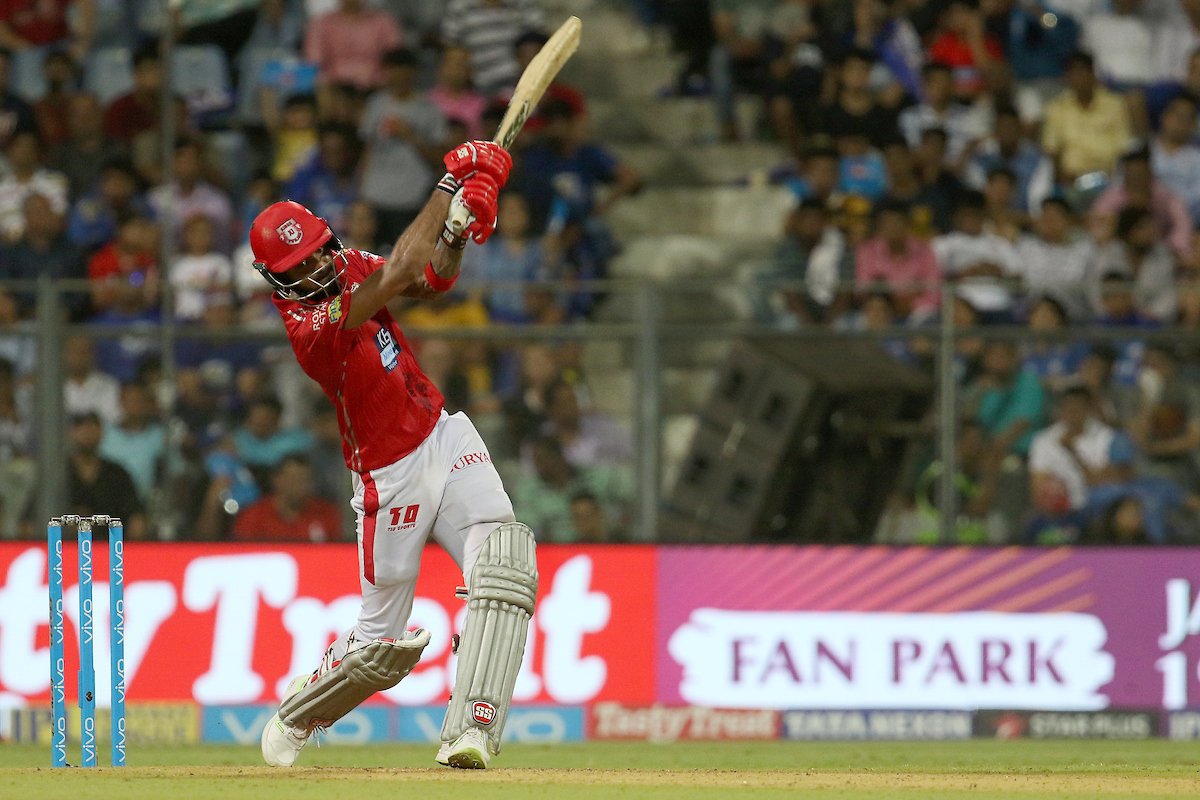 But just when things seemed good in the middle, Finch was dismissed by pacer Jasprit Bumrah in the 17th over. His 35-ball knock was laced with three boundaries and one six.

New batsman Marcus Stoinis (1) also failed and got dismissed in the same over.

While trying to match the increasing run rate, in-form Rahul was also dismissed by Bumrah in the 19th over. His 60-ball innings was laced with 10 boundaries and three sixes. 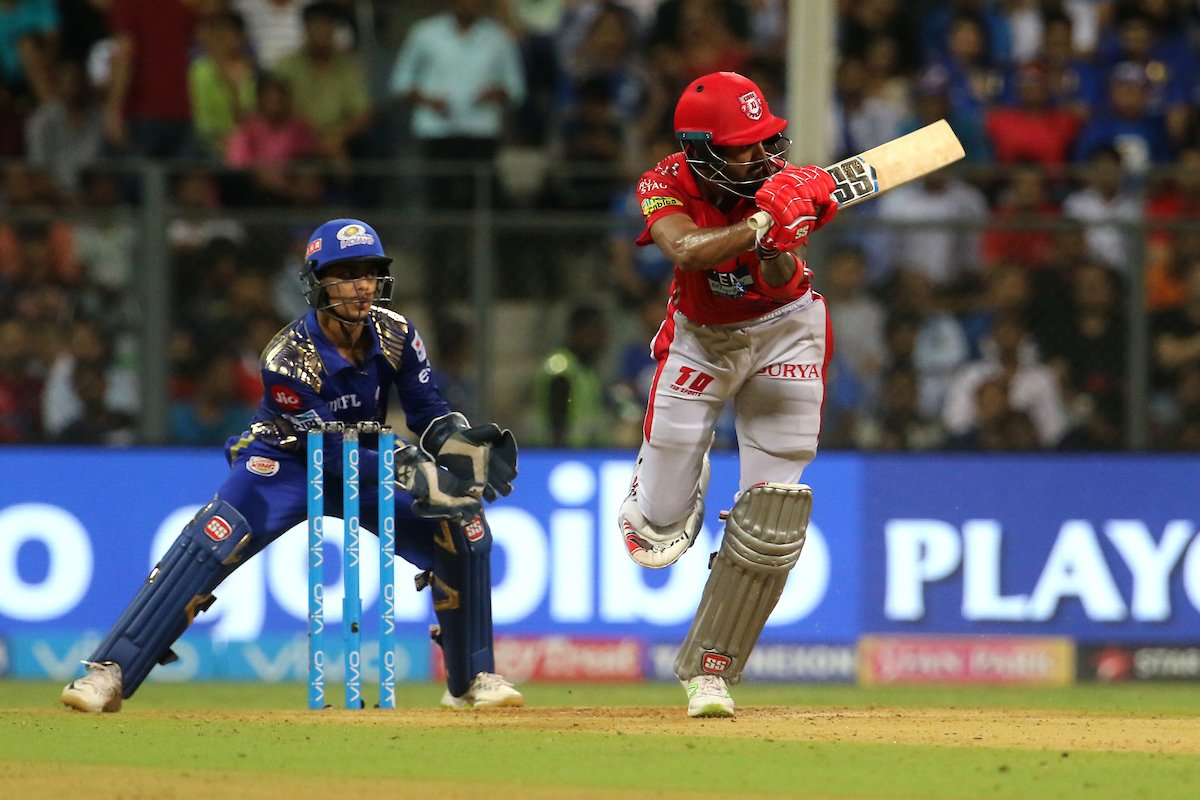 Middle-order batsmen Axar Patel (10 not out), Yuvraj Singh (1) and Manoj Tiwary (4 not out) tried to reach the target but failed.

Earlier, West Indian power-hitter Keiron Pollard finally found his groove with a fiery 50 to bail Mumbai Indians out of trouble and post a challenging 186/8. 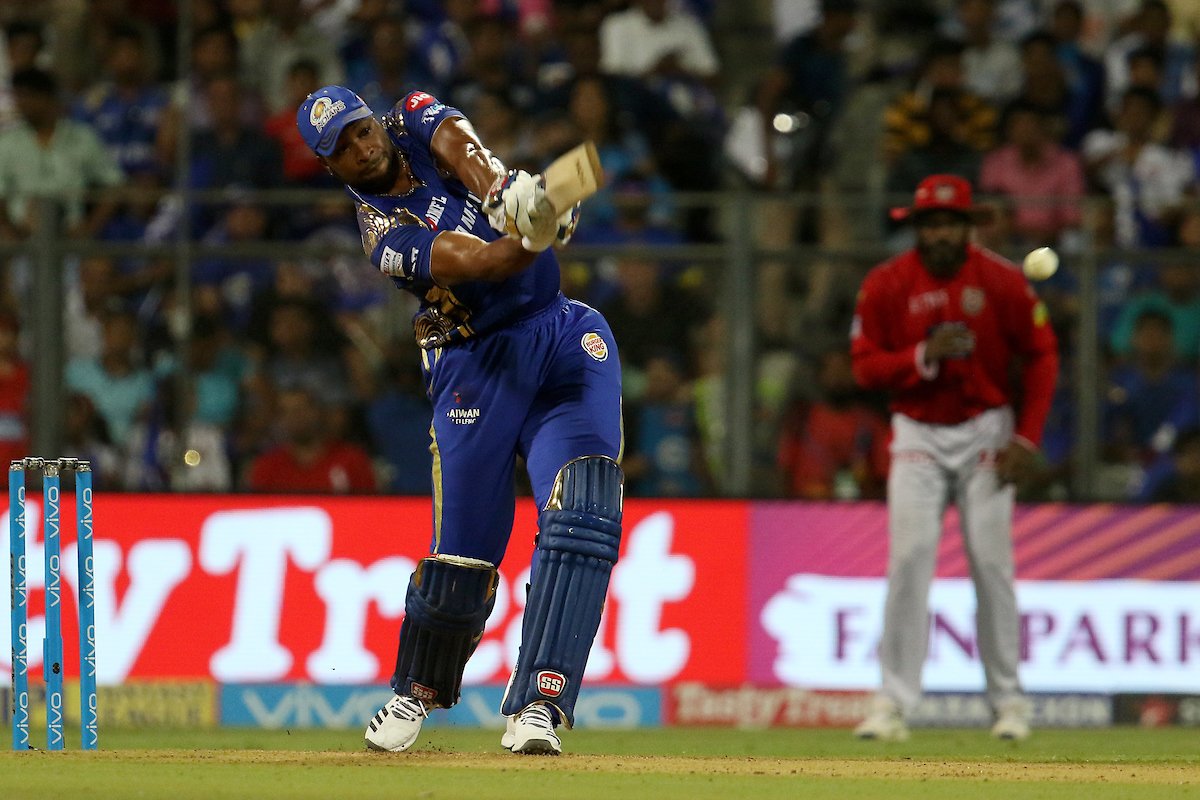 Put in to bat, Mumbai were off to a flying start with the in-form Suryakumar Yadav (27 from 15 balls; 4×3, 6×2) and Evin Lewis (9) putting on 37 runs in the first three overs before Australian Andrew Tye’s triple strikes reduced the hosts to 59/3 in no time. 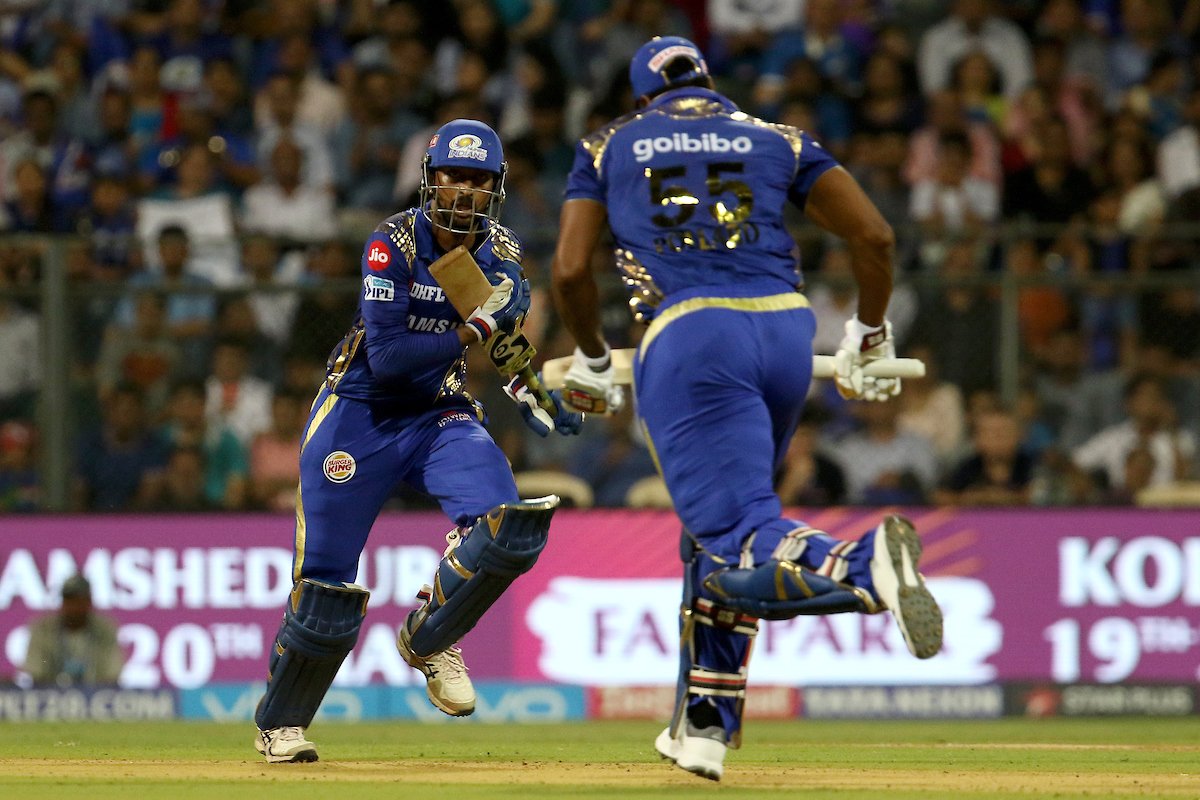 Continuing his glorious run with the bat, Suryakumar started off in his customary style before breaking loose as he smacked rookie pacer Ankit Rajpoot for two fours and as many sixes to milk 21 runs off the second over of the innings before Tye was employed into the attack.

Tye struck on the very first ball of his spell with a well-disguised knuckle ball that broke through the defences of Lewis before removing Yadav and wicketkeeper-batsman Ishan Kishan (20 off 12; 4×1, 6×2) off consecutive deliveries in his second over.

During his brief stay, Ishan also meted out some special treatment to India discard Mohit Sharma, clobbering the right-arm pacer for a boundary and two massive sixes before being dismissed.

Mumbai’s woes were compounded in the 9th over when a short-pitched delivery from Rajpoot cut short skipper Rohit Sharma’s (6) stay in the middle.

Tottering at 71/4 after eight overs, Mumbai’s hopes were pinned on Pollard and Krunal Pandya.

Coming back, the right-left duo of Pollard and Krunal sent the visiting bowlers to the leather hunt as they resurrected the innings with a quick-fire 65-run stand.

While Krunal took Aussie Marcus Stoinis to the cleaners twice before striking a boundary off consecutive deliveries, Pollard deposited left-arm spinner Axar Patel for a massive six before belting Rajpoot for two fours and a six.

Stoinis, however, bounced back in his next over to pack back Krunal with a deceptive slower bouncer, ending in a simple top edge to the hands of Rajpoot at short fine before being hit for two boundaries and a six by Pollard as the West Indian completed his 22-ball fifty.

With Pollard going great guns blazing, Punjab skipper Ravichandran Ashwin brought himself back into the attack and the ploy worked immediately in the form of the big-hitting Caribbean batsman’s wicket.

Ashwin struck once again with the wicket of Ben Cutting (4) before Tye came back to end Hardik Pandya’s (9) short stay and complete his four-wicket haul.

Jarry will be free to resume playing in November because the penalty was backdated to December 16.
byIANS

London, April 29: England batsman Alex Hales has been withdrawn from the national squad for the upcoming World…
byAsha Rai