Imran Khan is no more single, and it’s official. Pakistan Tehreek-e-Insaf (PTI) has confirmed that their chairman has tied the knot for a third time.

Photographs of Imran Khan’s Nikah with Bushra Wattoo have been unveiled. The photographs show Imran and a veiled Bushra along with several others, including PTI leaders Awn Chaudhry and Zulfi Bukhari.

On January 3, media was abuzz with reports of the PTI chief having contracted a third Nikah with the lady he used to visit for spiritual guidance.

But the party said that the Nikah ceremony was solemnised in Lahore on Sunday by Mufti Saeed. 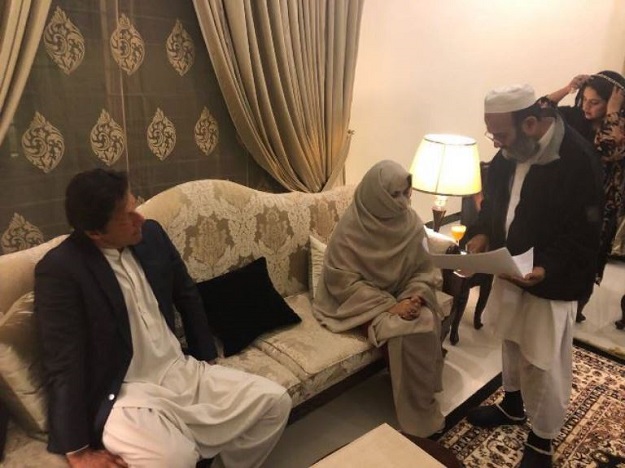 After much drama, Imran had broken his silence about his third marriage last month, clarifying that he had only sent a wedding proposal to Bushra and was awaiting her response.

According to a statement issued by the spokesperson for the PTI chief, Imran had sent a marriage proposal and the lady had sought time to consult her family, especially her children, before making any decision.

The statement insisted that the PTI chief would announce it publicly if Bushra accepted the marriage proposal. 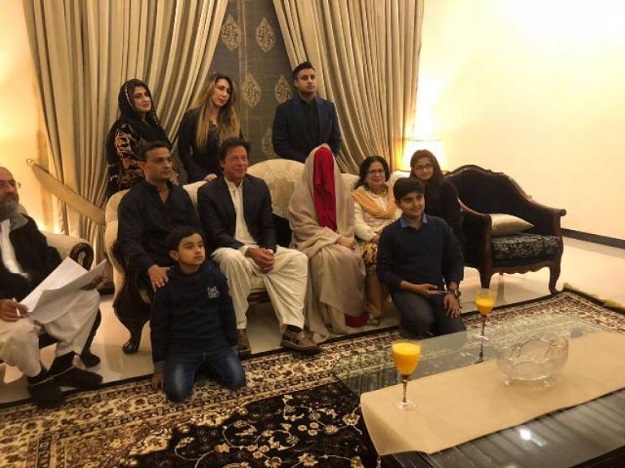 Last month, a local newspaper had claimed that Imran had already married for a third time and the woman in question was someone he used to visit for spiritual guidance.

The report also claimed that the wedding was held in Lahore on January 1 and was attended by Imran’s close aides.

In response, the PTI said an extremely private and sensitive matter was made the subject of an erroneous story leading to all manner of public conjecture.

“This has put an unacceptable burden, especially on the children of Bushra and Khan, who have had to learn of such a private and intimate issue from the media,” the statement said.

Stressing the need for restraint, Imran had urged the media to “give the two families, especially the children, their privacy”.

Imran Khan was previously married twice, but neither of his marriages lasted. He married Jemima Goldsmith, a British socialite, in 1995. The relationship ended in divorce in 2004. He then married journalist Reham Khan in 2015, but the marriage ended after just 10 months.

New Delhi, Oct 30: India has asked Saudi Arabia to take corrective steps on the misrepresentation of its territorial boundaries on a new bank note.

MEA Spokesperson Anurag Srivastava said India has asked Saudi Arabia to take “urgent corrective steps” in the matter, and emphasized that the entire Union Territories of Jammu and Kashmir and Ladakh are integral parts of the country.

“We have seen the banknote referred by you which gives an incorrect depiction of India’s external territorial boundaries. The note was issued by Saudi Arabian Monetary Authority on October 24 to mark the occasion of Saudi presidency of the G20,” the MEA spokesperson said.

“We have conveyed our serious concern to Saudi Arabia, both through their Ambassador in New Delhi as well as in Riyadh, for this gross misrepresentation of India’s external territorial boundaries on an official and legal banknote of Saudi Arabia and asked Saudi Arabia to take urgent corrective steps in this regard,” Srivastava said.

The measures include mandatory physical distancing, a ban on all public events with more than 50 people, the new limit of the number of people attending weddings and funerals and the provision that public events and gatherings can last up to 10 p.m. while weddings until midnight, Xinhua news agency reported.

Sports competitions can be held without spectators, according to the measures, which banned the sales of alcoholic beverages from midnight to 6 a.m.

Police officers in Rawalpindi have been banned from posting on the short video-making app, TikTok, after a video went viral, the media reported on Tuesday

Police officers in Rawalpindi have been banned from posting on the short video-making app, TikTok, after a video went viral, the media reported on Tuesday.

The police department of the Pakistan twin city has warned that if a video of any officer goes viral on social media, irrespective of whether it is TikTok, Facebook or YouTube, strict departmental action will be taken, The Express Tribune reported.

The new rules were communicated on Monday in a letter issued by Rawalpindi CPO Ahsan Younas to divisional SPs, circle officers and station house officers.

The letter stated that posting videos on social media and going viral presents a negative image of the department.

After the video went viral, at least one officer has been suspended.