Mumbai, Sep 19 : Heavy rains lashed Mumbai, the entire coastal Konkan region and parts of western Maharashtra since Tuesday afternoon, affecting normal life, said officials. The downpour came exactly a month after the deluge of August 19 which had brought Mumbai to a halt.

The India Meteorological Department has forecast heavy and widespread rains over large parts of Maharashtra and surroundings till September 23, while Mumbai, especially south Mumbai will experience very heavy rains till Wednesday noon.

Although Mumbai’s critical lifeline, the suburban trains and BEST bus services did not see any major disruptions, flight operations at Chhatrapati Shivaji Maharaj International Airport were disrupted for around 30 minutes this evening, forcing diversion of four incoming flights due to barely 250 metres visibility.

Suburban local trains were running behind by a few minutes – ranging from 10-20 – and barring a brief disruption on the Western Railway where a tree crashed on the tracks near Vile Parle, services continued uninterrupted, sparing the evening peak hour crowds. 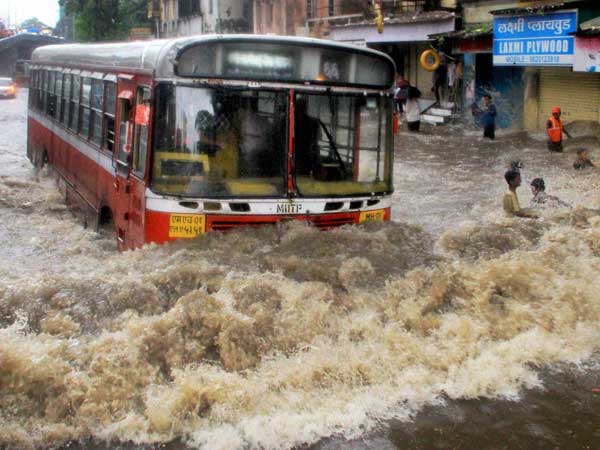 Several low lying areas in central Mumbai like Parel, Dadar and some areas of the suburbs like Chembur, Kurla, Andheri, Malad, Borivali, Dahisar experienced waterlogging, slowing down the home-bound traffic, but there was no dislocation on the roads and highways.

In the Konkan region, many towns and villages in Sindhudurg, Ratnagiri and Palghar districts experienced waterlogging, disrupting normal life.

In Papdi village of Palghar, hundreds of students were stranded when three schoolbuses carrying them home were stranded due to waterlogging and police and fire brigade were engaged in rescue efforts.

A portion of the Mumbai-Ahmedabad Highway near Manor in Palghar was submerged under water resulting in a massive traffic jam in both directions, which had a cascading effect on vehicular movement in adjoining Thane and Mumbai districts.

The BMC Disaster Cell and other agencies said they are prepared to tackle any eventuality arising out of the renewed spell of wet weather.

Two other political leaders -- Dilawar Mir and Ghulam Hassan Mir, who were under house arrest -- have also been freed.
byWeForNews Desk

Supriyo among 11 whose phones stolen at Jaitley’s funeral

The two were among the 11 others whose phones were stolen amid the jostling crowd that mobile phone thieves took advantage of.
byWeForNews Desk