Panaji, May 10 (IANS) The Goa BJP on Thursday begged to differ with the recent “pro-Karnataka” comments made by Prime Minister Narendra Modi and BJP President Amit Shah over the Mhadei issue during the poll campaign in Karnataka.

Addressing a press conference at the party’s state headquarters in Panaji on Thursday, state Bharatiya Janata Party (BJP) spokesperson and South Goa MP Narendra Savoikar said the Goa BJP had faith in the inter-state water dispute tribunal which is currently adjudicating the dispute. 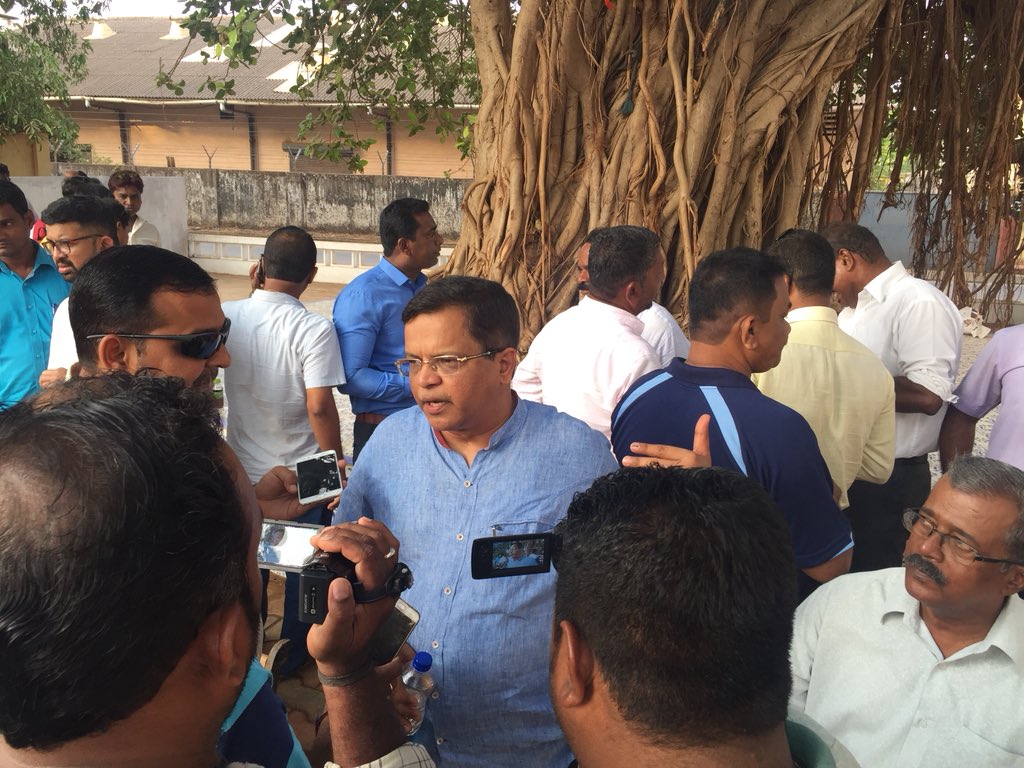 When asked to react to Shah’s comment at a poll rally in Karnataka’s Hubbali region, where the BJP President promised to resolve the Mhadei dispute in six months and that waters from the multi-state river would flow into Karnataka, Savoikar said: “He (Shah) has said, the issue will be solved immediately after (BJP comes to power). So far, as we are concerned, the matter right now is before the Tribunal… We will rely on the Tribunal award. Both states have placed their say before the Tribunal”.

Savoikar also said Shah had only promised to “resolve” the issue in his speech, while also accusing the Congress party of having double standards on the Mhadei issue.

When asked if the BJP’s Goa unit would be raising the Mhadei issue with Shah, during the latter’s one-day visit to Goa on Sunday, and expressly pitch for Goa’s case, Savoikar said: “The party president is visiting the state as a part of the organisational side. What the agenda will be, how much time will he give us…”

Goa, Karnataka and Maharashtra are currently contesting parties before the Mhadei inter-state water disputes tribunal over the controversial Kalsa-Bhandura dam project across the Mhadei river, through which Karnataka aims to divert water from the Mhadei basin to the nearby basin on the Malaprabha river.

The Tribunal hearing the dispute is expected to deliver a verdict in a few months.

Mhadei, also known as the Mandovi river, is considered as a lifeline in the northern parts of the coastal state.

It originates in Karnataka and meets the Arabian Sea in Panaji in Goa, while briefly flowing through Maharashtra.

It should be noted that the lotus is the symbol of the BJP and the state BJP headquarters in Gandhinagar is also named ‘Shri Kamalam’.

Gandhinagar Jan 20: Gujarat Chief Minister Vijay Rupani, while interacting with the media on Tuesday, said that the government has applied for a patent to change the nomenclature of dragon fruit to ‘Kamalam’.

According to the CM, the word dragon for the fruit sounded inappropriate and so the Gujarat government had decided for the fruit to be called as Kamalam.

While interacting with the media on Tuesday during the launch of the Chief Minister Horticulture Development Mission, Rupani said, “We have applied for the patent of the Dragon fruit to be called as Kamalam. But as of now, we the Gujarat government have decided to call the fruit as Kamalam.”

“Even though the fruit is known as dragon fruit, it doesn’t sound appropriate. The word Kamalam is a Sanskrit word and the fruit does have the shape of the lotus, so we have decided to call it Kamalam, and there’s nothing political about it,” Rupani added.

According to the CM, the fruit has long since been grown as a form of cactus in the country. “Nobody has to be alarmed by the word Kamalam,” Rupani added.

It should be noted that the lotus is the symbol of the BJP and the state BJP headquarters in Gandhinagar is also named ‘Shri Kamalam’.

“Accused Peraka Venkateswara Rao, 35, was convicted in the case and sentenced to eight months in jail on June 23, 2015,” the official said.

Amaravati, Jan 20: Police in Andhra Pradesh’s West Godavari district on Tuesday busted another fake news racket regarding temple attack in Eluru town and clarified that the Anjaneya Swamy idol incident was an old one.

“It came to our notice that some persons are using this 2014 incident as propaganda material to spread fake news on the social media,” said a district police official.

Police later registered a case under Sections 153-A and 295-A of the Indian Penal Code.

Police clarified that the Anjaneya Swamy idol incident occurred in 2014 and a case was registered then under Sections 295 and 427 of the IPC at Eluru town police station.

“Accused Peraka Venkateswara Rao, 35, was convicted in the case and sentenced to eight months in jail on June 23, 2015,” the official said.

Meanwhile, Prakasam district police arrested one more person for allegedly dubbing the damage due to corrosion to the Singarayikonda temple arch idols as an ‘attack’.

In this particular case, police identified 33 persons for spreading false information on the social media, of whom six were arrested from different places in the southern state.

Prakasam district Superintendent of Police Siddharth Kaushal on Tuesday visited multiple places to strengthen surveillance system, 24×7 beat and patrol systems for the security of all temples and religious places.

He met with members of village and mandal defence committees and gave suggestions on their security.

On Tuesday evening, Director General of Police Goutam Sawang held a videoconference with all districts police officials over the temple incidents in the state.

Gurugram, Jan 20: The Sanyukt Kisan Morcha in Gurugram has announced that they will conduct a tractor rally ‘rehearsal’ in Gurugram on Wednesday ahead of Republic Day, in support of the farmers’ protests against the three farm laws.

SKM president Chaudhary Santokh Singh said that on Wednesday the rehearsal of the tractor rally will begin from the Bajghera flyover and will end at the protest site on the Delhi-Jaipur highway.

About 100 tractors will take part in the rehearsal. All tractors will have Morcha members present and will carry the national flag.

“The central government is aware of the flaws in the agricultural laws but is not ready to accept its mistake and is continuously harassing the innocent farmers at several borders of the national capital. The government must let go of its arrogant behaviour and roll back the black laws,” Singh said.

He said that on January 26, the farmers will join Republic Day by affixing the tricolour in front of their tractors and will proceed towards the national capital if permitted.

The protesting farmers said that it will be good if the Centre repeals the farm laws immediately, because the farmer movement has become a mass movement and people of other classes have also started supporting the farmers.

Who is he? Is he my professor: Rahul Gandhi on JP Nadda