Flydubai flight FZ981 has crashed in the southern Russian city of Rostov-on-Don killing all 62 passengers and crew on board. The flight was en route from Dubai and crashed during its second landing approach amid poor weather conditions.

Air-traffic control and local emergency services confirmed that the Boeing 737-800 jet crashed near the runway during a second approach in conditions of poor visibility.

“According to preliminary data, the Boeing 738 crashed in poor visibility conditions, some 50-100 meters left of the runway,”the source said.

A video recorded at the crash site reveals the Boeing-737-800 disintegrated on impact. Tiny pieces of the aircraft are scattered over a large part of the runway at Rostov-on-Don’s airport.

Flydubai flight FZ981 has crashed in the southern Russian city of Rostov-on-Don killing all 62 passengers and crew on board. The flight was en route from Dubai and crashed during its second landing approach amid poor weather conditions.

An eyewitness, Arina Kozlova, who was driving near Rostov-on-Don Airport at the time of the crash, said the blaze from the explosion was so bright it was like having dawn in the middle of the night.

CCTV camera footage posted on YouTube claims to have captured the moment of the explosion as the aircraft impacted the ground. However, its authenticity could not be immediately verified.

All crew and passengers on board the plane were killed in the crash, according to the regional Emergencies Ministry.

“During the landing approach a Boeing-737 crashed. It had 55 passengers on board. All of them died,” a regional spokesman told TASS.

“The plane, according to preliminary data, crashed during the second approach,” the source told Interfax.

Spokesman for the southern bureau of Russia’s Investigative Committee, Oksana Kovrizhnaya, has put forward two versions of the crash: “Pilot error in deteriorating weather conditions or a technical failure,” she said. 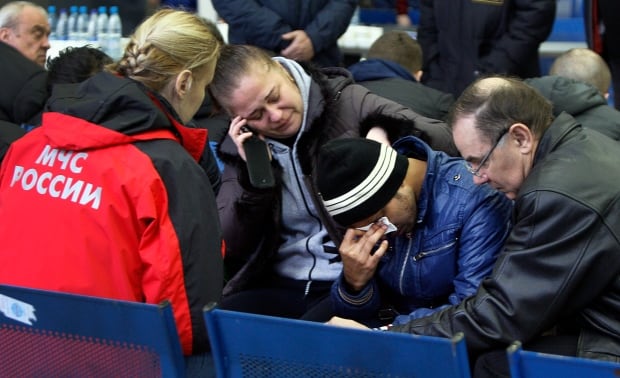 Both FZ981 flight data recorders have been recovered from the crash site. Experts are evaluating whether any data can be retrieved from them, said Vladimir Markin, spokesman for the Russia’s Investigative Committee (IC). The cockpit voice recorder was found in the morning and the parametric recorder was recovered later in the day.

For the FlyDubai air company, which started operations in 2009, the crash in Rostov-on-Don was the first fatal incident in the company’s history.

Ghaith Al-Ghaith, CEO of FlyDubai, has excluded the possibility of a terror act on ill-fated flight FZ981. No distress signal had been issued by the pilots either, he said.

Al-Ghaith insists the captain, Aristos Socratous, was a highly experienced pilot with over 5,700 flight hours and that the plane was new. Manufactured in 2011, the aircraft passed its latest maintenance on January 21, 2016.

Initial reports suggested that all passengers on board were Russians, however the Emergencies Ministry later confirmed that 11 foreigners were on board the flight, including all the crew members.

LifeNews reports citizens of Cyprus (captain), Colombia, Kirgizia, Russia, Spain (2) and the Seychelles were among the crew members.

The company confirmed that there were 62 people on board.

A record of what appears to be conversation of the pilot of the crashed Boeing-737-800 with the control tower in Rostov-on-Don has been published on the web.

The FlyDubai company has issued an official statement about flight FZ981.

“FlyDubai is deeply sorry to confirm the following information in relation to the tragic accident involving flight FZ981 which was flying from Dubai International (DXB) to Rostov on Don (ROV).”

Emergency crews are working at the scene of the crash and have already put out the fire, according to a TASS source.

IC spokesman Vladimir Markin said “no less than 50” experts and experienced investigators are at the crash site, collecting evidence.

“Site inspection is actively underway. IC investigators are collecting the remains of the passengers for subsequent forensic, genetic examination,” Markin said in a statement published on the Russian Investigative Committee’s official website.

There are some 25 psychologists currently working with relatives of the crash victims at the airport. Thirteen are specialists from the Emergency Ministry, including the director of the Center for Emergency Psychological Aid, Yulia Shoigu told RT. Several hotline phone numbers have been opened in both Rostov-on-Don and Moscow, Shoigu added.

The airport is to remain closed until at least March 20, 7:00am Moscow time. The inbound flights are getting rerouted to Krasnodar.

The Emergencies Ministry has opened up a hotline while a team of psychologists has been sent to help the grieving relatives.

“The Russian president feels deeply for all those who lost their loved ones in the Boeing 737 crash in Rostov-on-Don,”Kremlin spokesman Dmitry Peskov announced on Saturday, stressing that the president has made it a priority to provide all possible assistance to the relatives of the victims.

Russia’s Investigative Committee has launched a probe into the incident with preliminary data indicating that the plane disintegrated and caught fire upon touching the ground.

The head of the Emergency Ministry Vladimir Puchkov has held a special meeting, with all the ministry’s efforts, and resources of the local response teams and authorities, directed to the crash site.

There are over 700 response team specialists and about 100 special vehicles operating at the Rostov-on-Don Airport right now.

Relatives of the victims are gathering at the airport, Vasily Golubev, governor of Rostov region, told media. He stressed that everyone will get sympathetic and personal attention.

Golubev said most of the Russian passengers were tourists.

The governor said the weather conditions at the crash site are better than they were at nighttime, and though it is still raining, the wind has weakened and the well-equipped response teams will continue to work while there is light.

“The latest attack is a grim addition to the human cost which we bear collectively,” Daniel Bekele, commission head, said in a statement.
byWeForNews Desk

Quebec City, June 10: US President Donald Trump said on Saturday that he will attend the upcoming meeting…
byAarti Bali

There will never be a friendly solution to the North Korea problem if this continues to happen.
byAH Siddiqui