New Delhi, May 7:  In the run-up to the Karnataka assembly elections, Congress president Rahul Gandhi on Monday held a roadshow and protest march in Karnataka’s Kolar district against the rising Petrol and Fuel Prices in the country.

While addressing a public rally in Kolar, Rahul attacked PM Modi over high prices of petrol in the country. He said that ”Despite the prices falling across the world, fuel rates increased under the NDA Government”.

People, especially the women of Kolur, turned out in large numbers to support Rahul’s protest against rising fuel prices.

After the protest, Rahul Gandhi rode a bicycle in Kolar. 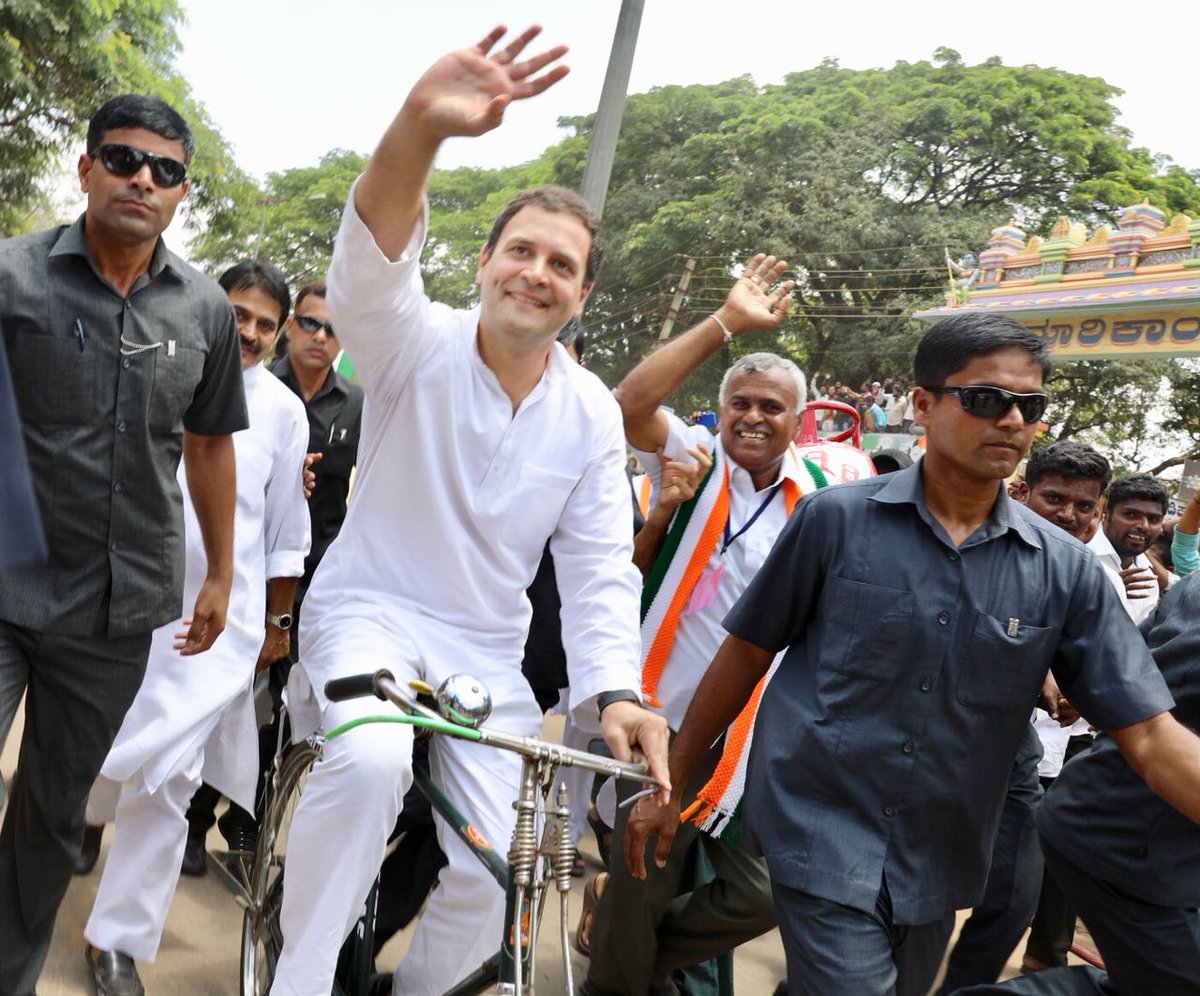 Completing the roadshow, Rahul addressed the public rally in Hoskote.

Here are the highlights of Rahul Gandhi addressing the public rally in Hoskote:

* Rahul Gandhi says the Congress stands united to defeat the BJP in Karnataka. “We will win and form a people’s government,” he said.

* “In the next 5 years, every person in Karnataka will own a house. Unlike PM Modi, we keep our promises,” says Gandhi. Rahul said Congress will focus on creating a network of food-processing plants across Karnataka for the benefit of farmers.

In the next 5 years, every person in Karnataka will own a house. Unlike PM Modi, we keep our promises: Congress President @RahulGandhi #CongressMathomme #JanaAashirwadaYatre #INC4Karnataka pic.twitter.com/J4buDpT1Rq

*Gandhi says the farmers of this country are suffering but PM Modi has turned a deaf ear to them. “Our government in Karnataka has delivered what it had promised. The success of our various welfare schemes speaks for itself,” he says.

“PM Modi rode to power on the promise of reducing fuel prices. He should explain to the people why fuel prices are rising and why is he unable to curtail them,” says Rahul Gandhi.

*Gandhi says that PM Modi speaks of anti-corruption but shares the stage with people who have spent time in jails for corruption.

“On stage, Modi ji has Yeddyurappa on his right — whom Amit Shah had called the most corrupt chief minister — and on his left are four minister who went to jail with Yeddyurappa. In the line behind them are the Reddy bothers.”

*“This election has the philosophy of Basava, the Congress party and Indira Gandhi on one hand and BJP and RSS on the other,” Rahul Gandhi says.

*Gandhi says that the strength of Karnataka is in the hands of its farmers, women, youth, small businessmen and all its people.

*The Congress government, when it comes to power in 2019 (Lok Sabha elections), will waive farmers’ loans in 10 days of getting elected: Gandhi

People, especially the women of Kolur, turned out in large numbers to support Rahul’s protest against rising fuel prices.

Earlier on Monday Morning, Gandhi took to Twitter announcing the protest claiming that the BJP Government has collected 10 lakh crore rupees as taxes from Petrol, LPG and Diesel since it came to power in 2014.

Taking a jibe, he also shared a video of previous speeches of Prime Minister Narendra Modi and other senior leaders from the UPA days wherein they express anguish over hike in petrol and diesel prices. In video, PM Modi can be heard saying that the increase in petrol prices was living proof of inefficiency of the central government in running the country.

The BJP Govt. collected 10 Lakh Crore in taxes on Petrol/LPG/Diesel since 2014. Yet, NO relief in prices for our citizens. This video shows the truth about fuel prices under PM Modi.

I will lead a protest against these prices in Kolar at Noon, today.#BJPReducePetrolPrices pic.twitter.com/YCnKwDPm6W

The prices of petrol and diesel have been soaring high since April 2018. On April 22, the prices reached a record high with Petrol being sold at Rs 74.40/litre and diesel at Rs 65.65/litre in Delhi.

Voting for the 224-member Karnataka Assembly will take place on May 12. The result of the polls will be declared on May 15.