“Jyotiraditya Scindia, you have Jiwajirao’s blood running in your veins, who killed Jhansi ki Rani. If you step in Hatta then I will shoot you. Either you will die or I will.” Lalchand Khatik said in a Facebook post.

His statement comes ahead of Scindia’s slated to hold a rally on September 5 in Hatta district of Madhya Pradesh. 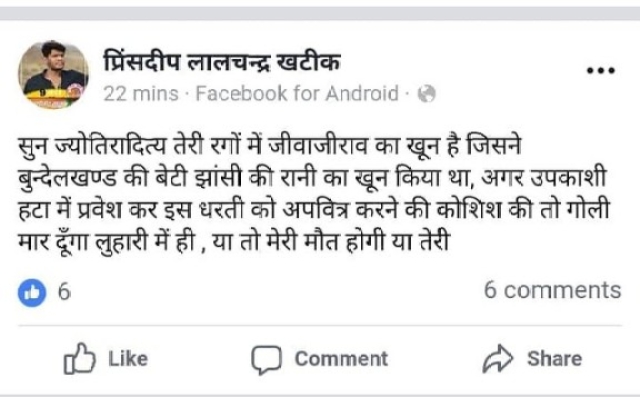 Uma Devi, BJP MLA from Madhya Pradesh’s Hatta Vidhan Sabha constituency told IANS: “This post is unfortunate. Scindia is a respectable MP. I will ask my son to remove the post.”

"Yesterday, newspapers carried very hot and burning articles. This government came to power by saying that Rs 1.73 lakh crore loss to the exchequer in 2G (spectrum allocation). We suffered a lot. That is not the question. I want to ask a legitimate question," Raja said.
byIANS

CWC to meet in Ahmedabad on Feb 26