BJP causing divisions in society, we will defeat it in 2019: Rahul Gandhi

Berlin, Aug 24 (IANS) Congress President Rahul Gandhi has alleged that the BJP and RSS were weakening the country “by causing divisions and spreading hatred.” He said the combined opposition will defeat the ruling alliance in the 2019 Lok Sabha elections.

The Congress leader said he hugged Modi during the debate on no-confidence motion last month to “remove anger” from him.

“When people are angry with me and shouting at me and getting nasty at me, they are frustrated with their own life. They are not angry with me, they are having difficulty dealing with their life. And it is my job as a politician in India to tell them ‘don’t worry I am going to try and help you, I am going to try and remove the anger from you’. That is why I hugged the Prime Minister,” he said.

“Modi has spent a lot of time attacking me, saying nasty things about me. Did everything he said travel faster or my hug (in the Lok Sabha) and affection travel faster. So affection is a very powerful thing,” he added.

“Hatred is being spread, farmers continue to commit suicide and the youth are unable to see a way forward,” he said.

Gandhi, who took questions, said for the first time judges of the Supreme Court “came to the people for justice”. “They have said clearly that they are not being allowed to do their work. The government, the RSS, the Prime Minister are not allowing them to do their work,” he said. 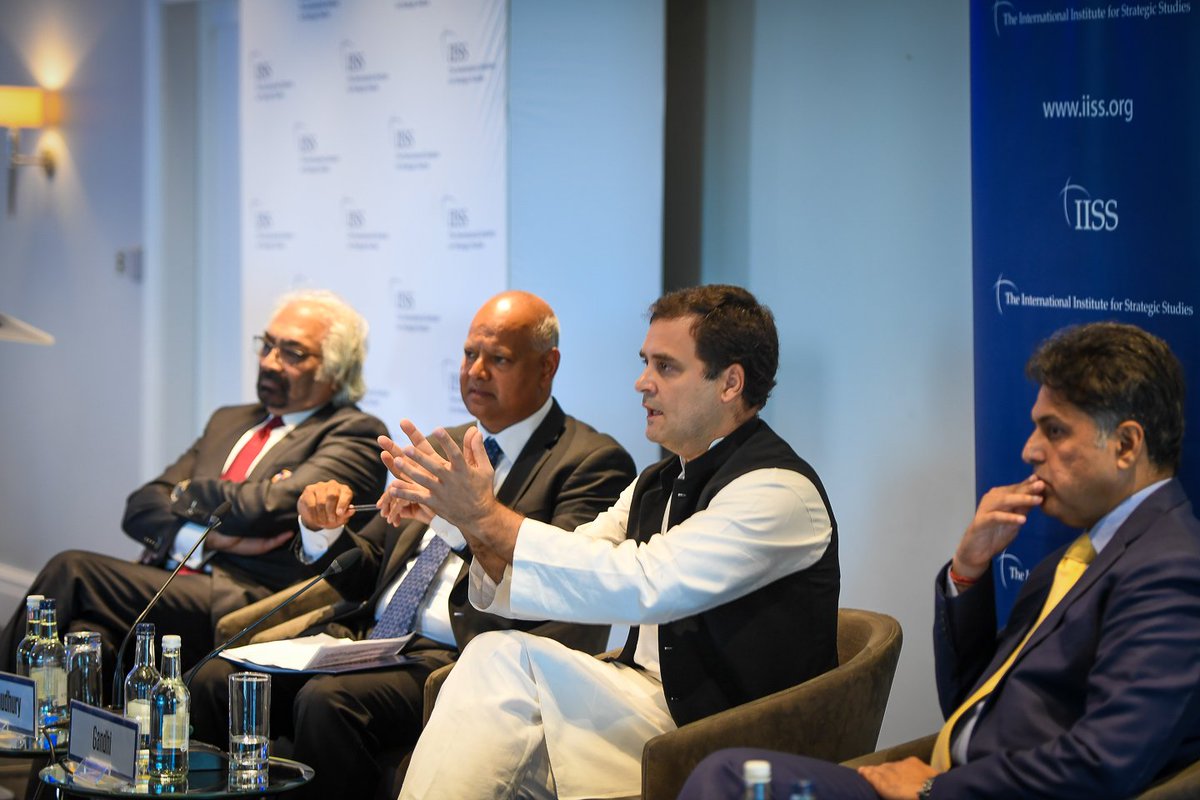 The Congress leader said there was a strong common feeling among Opposition parties that the BJP and RSS should not be allowed to “destroy institutions.”

“A united opposition is going to fight and defeat the BJP in the next election. There is no doubt,” he said, adding that the BJP had bagged only 31 per cent votes in the 2014 elections.

“If the opposition gets together, there’s no way that the BJP can win the election,” Gandhi said.

Noting that he derives his thinking from the teachings of Guru Nanak, Gandhi said , “the work that Guru Nanakji did, we work by that vision.”

Spelling out an alternative vision, he said the new government, formed by parties that are in opposition at present, will focus on education, healthcare and put energy in competing with the Chinese to make sure that India “starts to produce jobs for its youngsters.”

“We are not going to do it with ‘Make In India’ programme that gives the entire finance of the banking sector to the largest 15-20 industrialists. We are going to do it by supporting small and medium businesses. So, it is a completely different vision from the BJP’s,” he said.

He said the informal sector is the backbone of India in terms of job creation.

He said if the Congress comes to power in 2019 election, it will fulfil the promise of special category status for Andhra Pradesh.

Gandhi accused the the government of causing Rs 41,000 crore loss to the exchequer in the Rafale fighter jet deal with France. The offset contract had been taken away from a public sector undertaking, he alleged.

Police said here that three motorcycle borne outlaws gunned down the bank employee Alok Chandra (30) when he was on way to Arwal branch of Bank of Baroda.
byAH Siddiqui