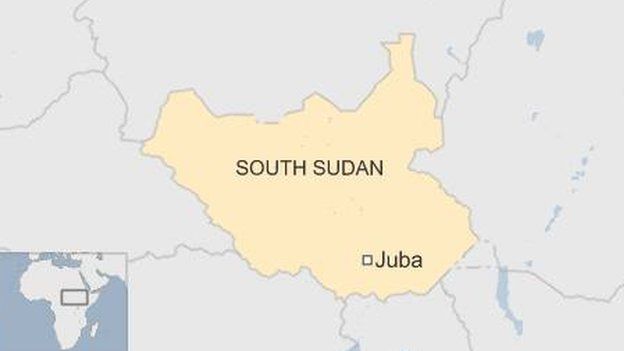 The fighting on Friday was apparently sparked by a shootout between Kiir’s and Machar’s bodyguards.

Sudan People’s Liberation Army-In-Opposition (SPLA-1O) spokesman William Gatjiath said on Saturday that the majority of the bodies were of soldiers, noting that the mortuary at Juba Teaching Hospital was full.

Gatjith said the SPLA-IO, which is being led by First Vice-President Riek Machar, incurred a number of casualties, adding that a search is still on for bodies at the State House and suburb of Juba a few hours after the gun fight.

“We have counted 35 bodies of the first circle of our bodyguards, while in Sudan People’s Liberation Army in Government (SPLA-IG) that were deployed outside the fence of State House were 80 soldiers,” Gatjiath told Xinhua in Juba.

Heavy gunfire including artillery fire had been heard from around the presidential compound since about 5:30 p.m. on Friday where President Salva Kiir, First Vice-President Riek Machar, and Vice President Wani Igga were having a meeting following Thursday’s brawl that left five soldiers dead and two wounded.

The shooting spread to nearly all neighbourhoods of the city, including outside the UN base near Jebel where some 28,000 displaced people were sheltering.

Under a peace deal agreed in August 2015, the two armed factions took up positions in Juba in April. However, the deal to end a 20-month civil war has failed to quell unrest.

Juba is in lockdown as South Sudan, the world’s newest country, marks the fifth anniversary of independence from neighbouring Sudan.

Beyond Dallas, police come under fire in three states

New York, Nov 28 : The US’ Federal Bureau of Investigation (FBI) is reminding the public of a $100,000-reward offer for information leading to the capture of Indian-origin Bhadreshkumar Chetanbhai Patel, who has been listed by the agency as one of the “10 Most Wanted” since 2017.

Patel has been on the run since 2015 when he allegedly killed his wife, Palak, with a knife inside a Dunkin Donuts coffee shop in Hanover, Maryland state.

He has been charged with murder.

Although he was put on the list in 2017 with the $100,000 reward for information leading to his capture he has not been caught and on Friday the FBI tweeted information about him and the reward to draw attention to the case and the reward offer.

The FBI is asking anyone who knows where he is to contact the agency or the nearest US consulate or embassy.

Patel, who was 24 at that time, allegedly hit his 21-year-old wife in the face with a kitchen knife and stabbed her several times in the backroom of the shop where they both worked while customers were still there, according to officials quoted by WTOP radio.

He was last known to have taken a taxi from a hotel in New Jersey to a train station in Newark in the state.

Tim Altomare, who was the police chief of Anne Arundel County at that time, told the radio: “The violence in this case was stark. It was heart-wrenching and it was a shock to our collective conscience on the police department.”

WTOP reported that investigators think that Patel was still in the US in 2017 when he was put on the FBI list and according to Altomare investigators believe that someone was knowingly helping Patel or was interacting with him without knowing about his alleged crime.

The radio reported that according to Gordon Johnson, who was the special agent in charge of the FBI’s Baltimore field office in 2017, Patel was put on the list because of the brutality of the crime and the likelihood that someone outside the US knows where he was.

The couple’s visas expired about a month before the killing and investigators believe that Palak Patel wanted to return to India, but her husband opposed it, WTOP reported.

According to the FBI he was born in Kantrodi Ta Viramgam in Gujarat.

“If Iran ever chose to weaponise (enrichment), Fakhrizadeh would be known as the father of the Iranian bomb,” one Western diplomat told media in 2014.

Tehran, Nov 28 : Iran’s most senior nuclear scientist Mohsen Fakhrizadeh has been assassinated near the capital Tehran, the country’s defence ministry has confirmed.

Fakhrizadeh died in hospital after an attack in Absard, in Damavand county, the BBC reported.

Iran’s Foreign Minister Mohammad Javad Zarif, has condemned the killing “as an act of state terror”.

“If Iran ever chose to weaponise (enrichment), Fakhrizadeh would be known as the father of the Iranian bomb,” one Western diplomat told media in 2014.

Iran insists its nuclear programme is exclusively for peaceful purposes.

But news of the killing comes amid fresh concern about the increased amount of enriched uranium that the country is producing. Enriched uranium is a vital component for both civil nuclear power generation and military nuclear weapons.

A 2015 deal with six world powers had placed limits on its production, but since President Donald Trump abandoned the deal in 2018, Iran has been deliberately reneging on its agreements.

Joe Biden has pledged to reengage with Iran when he takes over the US presidency in January, despite longstanding opposition from Israel .

Between 2010 and 2012, four Iranian nuclear scientists were assassinated and Iran has accused Israel of complicity in the killings.

There has been no comment from Israel on the news of the assassination. The Pentagon has also declined to comment, according to media.

“After a clash between the terrorists and his bodyguards, Mr Fakhrizadeh was severely injured and rushed to hospital.

“Unfortunately, the medical team’s efforts to save him were unsuccessful and minutes ago he passed away.”

Iranian media reports said the attackers opened fire on the scientist in his car.

Earlier media reports had said that there was a car explosion in Absard town, with witnesses reporting that “three to four individuals, who are said to have been terrorists, were killed”.

The judge appointed by former President Barack Obama said he could not find any case in which a plaintiff “has sought such a drastic remedy in the contest of an election”.

Washington, Nov 28 : A federal appeals court in the US state of Pennsylvania upheld a previous ruling by a lower court against the re-election campaign of President Donald Trump, dealing another blow to his effort to overturn the results of the November 3 election.

On Friday, the three-judge panel of the Third US Circuit Court of Appeals in Philadelphia determined that the Trump campaign’s claims of widespread voter fraud in the state “have no merit”, Xinhua news agency reported.

“Free, fair elections are the lifeblood of our democracy,” Judge Stephanos Bibas, a Trump appointee, wrote in the 21-page opinion.

“Charges of unfairness are serious. But calling an election unfair does not make it so. Charges require specific allegations and then proof. We have neither here,” he added.

The three Republican-appointed judges determined that US District Judge Matthew Brann’s ruling last week to reject the campaign’s lawsuit seeking to prevent the Pennsylvania’s certification of its election results for Democratic President-elect Joe Biden was justified.

The campaign’s lawsuit alleged that some counties in the ‘Keystone State’ allowed mail-in voters to fix problems by casting provisional ballots.

Brann said in a scathing opinion that the lawsuit provided “strained legal arguments without merit and speculative accusations, unpled in the operative complaint and unsupported by evidence”.

The judge appointed by former President Barack Obama said he could not find any case in which a plaintiff “has sought such a drastic remedy in the contest of an election”.

In reaction to Friday’s development, Trump said on Twitter that the ruling was “all a continuation of the never ending Witch Hunt”, adding that Brann “would not even allow us to present our case or evidence” .

Brann didn’t allow the campaign to file an amended complaint, which led to the campaign’s appeal.

“The Campaign never alleges that any ballot was fraudulent or cast by an illegal voter,” wrote Bibas, the Third Circuit’s judge.

“The Second Amended Complaint still suffers from these core defects, so granting leave to amend would have been futile,” he added.

The Trump campaign is reportedly going to appeal the case to the US Supreme Court.

Pennsylvania certified its election results on Tuesday for Biden, formally awarding its 20 electoral votes to the former Vice President.

So far, Biden has won 80,218,808 popular votes to date, compared to Trump’s 73,947,962, according to The Cook Political Report, an influential analytical site focused on US presidential, congressional and gubernatorial elections.

US media have projected that Biden has won 306 electoral votes, surpassing the 270-vote threshold for clinching the presidency.

Biden has declared victory and announced the first tranche of his Cabinet nominees, including national security and foreign policy officials.

The General Services Administration has initiated Biden’s formal transition into the White House, but Trump, despite having directed his administration to facilitate the process, has vowed to continue the legal fight to challenge the election results.

Ahmedbhai had no personal ambition, only interest was Congress: CWC