New Delhi, March 15: Actress Vaani Kapoor beautifully transformed from a belle of the ball to a James Bond girl for an Amazon India Fashion Week (AIFW) Autumn-Winter 2018 show, which saw a collaboration between designers Gauri and Nainika and Ashish N. Soni.

It was one-of-a-kind show that involved two designers and one showstopper.

Vaani began the show, which closed Day One of the gala on Wednesday, in a white dreamy floor sweeping sheer outfit with ruffles designed by Gauri and Nainika. 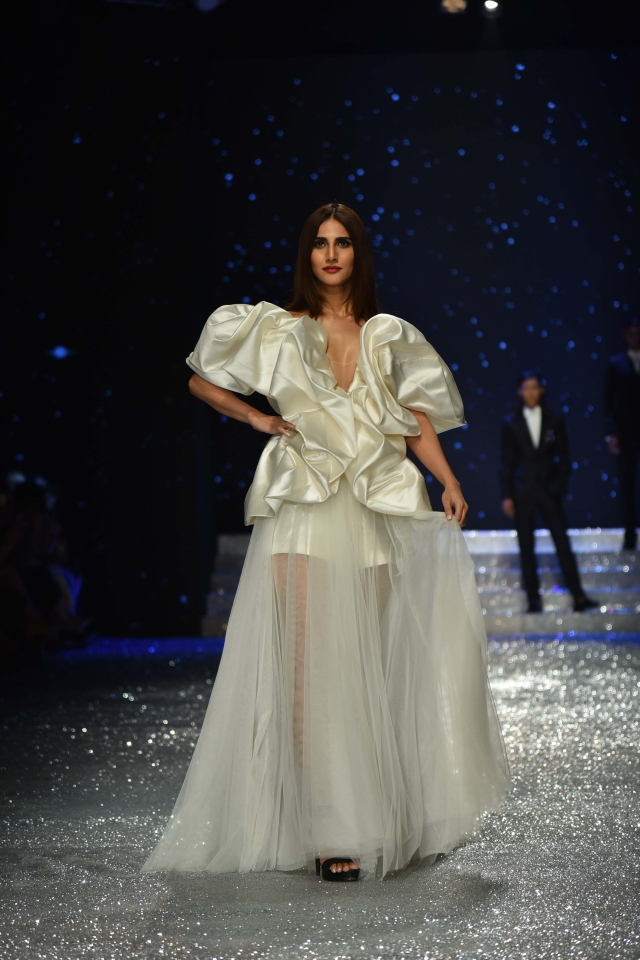 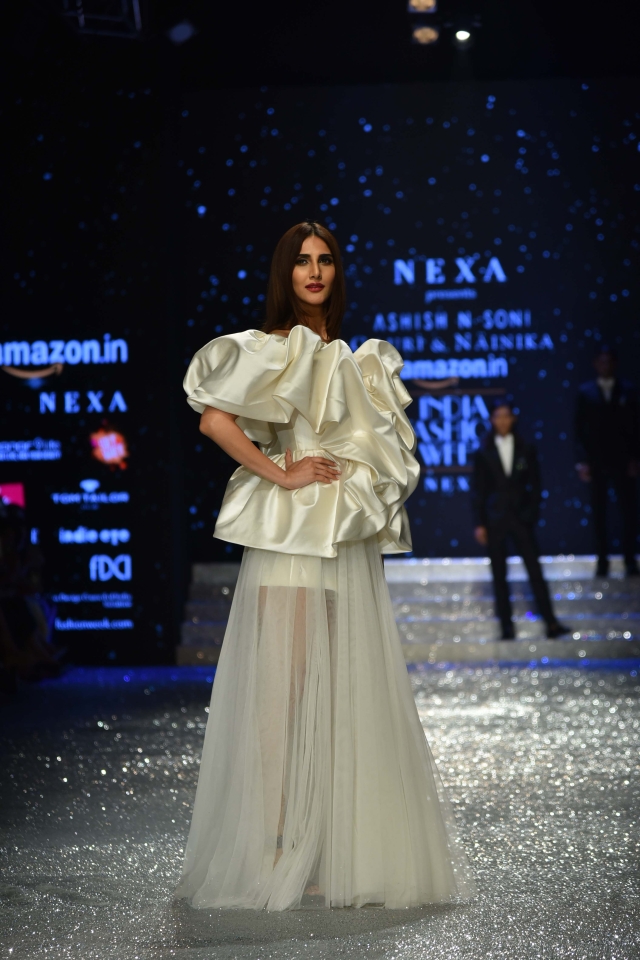 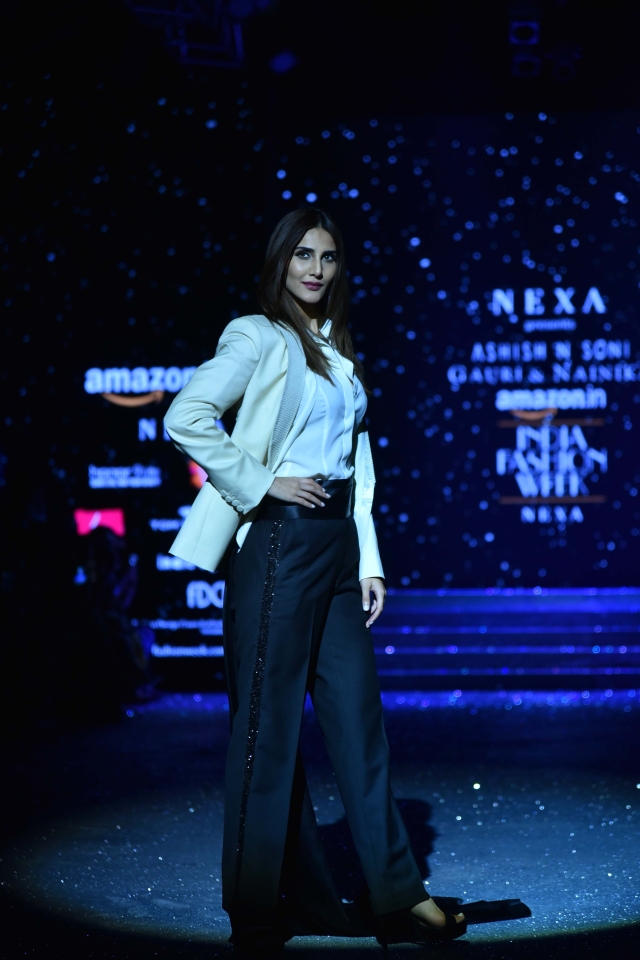 The menswear, which also focused on palette extremes of pitch black and pure white, by Soni was oozing with class and sophistication.

It was a modern take on the white tie dress code for men.

To match the collection, the music picked for the evening was all from James Bond films. So, models walked in style to songs like “Skyfall” and “Golden eye”.

“There was a lot of sophistication like Bond,” Soni shared about his collection and why they picked James Bond theme.

Vaani closed the show in a black and white suit with a black trail created by Soni.

Belle of the ball 👸🏼or Bond girl ? Opened the show for @gauriandnainika and closed it for @nashishsoni at the first ever presentation of #aifwaw18

“It’s an honour to be walking for such brilliant designers. And I get to keep this creation,” Vaani told media after the show.

Nainika was thrilled about the show.

“Two designers mixed their creations and showed them on the ramp. Women were like Bond girls, very chic and feminine. Ashish’s men were so classy in bow and tie, well fitted black and white suits. We came together wonderfully,” she added.

“It’s a first time, first women in class. There is unlimited access. She will be giving all her experience, all her insights from her 25-year long career,” Urvashi added.

“This pandemic has taught me to explore more about myself and now I have been taking an online master class from Natalie Portman, she is an Oscar-winning actress and she was part of my favourite films ‘Black Swan’ and ‘Jackie’,” Urvashi told IANS.

“It’s a first time, first women in class. There is unlimited access. She will be giving all her experience, all her insights from her 25-year long career,” Urvashi added.

The actress, who has worked in films like “Great Grand Masti” and “Pagalpanti”, calls acting a joyful experience.

“Acting is a very joyful experience for me and I think she (Natalie) the best choice. It’s all about learning the technicality, she will be sharing all the direct approaches towards acting including how to build a character map, how to research for the character, how to work with the director, how to build the physicality and consciousness to each character,” she said.

This is not the first time Mumbai Police has used a reference from a Bollywood film to create awareness.

Mumbai, May 27 : Bollywood actor Ayushmann Khurrana has replied to the COVID-19 meme inspired by his upcoming film, “Gulabo Sitabo”, which has been shared by Mumbai Police.

Mumbai Police on their official account tweeted a still from the film, featuring Ayushamann with his co-star Amitabh Bachchan.

The caption, in Marathi, read: “Home is yours, land is yours, choice is yours, but for going out, permission is ours, for your safety. The safest place to stay away from Coronavirus is your haveli. Do not go out without any reason. Stay safe”

This is not the first time Mumbai Police has used a reference from a Bollywood film to create awareness.

Previously they have tweeted with stills and dialogues from films like “Main Hoon Na” and “Stree” among many others.

Last week in an interview with the Wall Street Journal, the singer revealed his family had been sick with COVID-19.

Los Angeles, May 27 : Italian music icon Andrea Bocelli has confirmed that he had tested positive for the coronavirus in March, adding that he made “full recovery” before his historic Easter Sunday webcast at the Milan cathedral.

In a Facebook post shared on Tuesday, the opera singer explained he did not reveal his diagnosis earlier because he wanted to protect his family’s privacy, reports variety.com.

The 61-year-old added that he hid the news because he didn’t want to “unnecessarily alarm” his fans, saying that he has donated his blood to help researchers find a cure for coronavirus.

“The pandemic which has shaken the world has also affected — albeit mildly — me and certain members of my family,” Bocelli said, adding: “I certainly didn’t want to unnecessarily alarm my fans and also wished to protect my family’s privacy.”

He continued: “We were fortunate enough to have a swift and full recovery by the end of March. Given the chance to donate blood to help find a cure for Covid, my response was an immediate ‘yes’. A modest — but fundamental — gesture, through which I am playing my small part.”

Last week in an interview with the Wall Street Journal, the singer revealed his family had been sick with COVID-19.

“I was able to be with my entire family and we all got infected. We had a fever, then we were cold, and then we got a little bit of a cough,” he said.

Bocelli, who has been blind since age 12, broke YouTube records last month on Easter Sunday with his “Music For Hope” concert. The performance was viewed by more than 28 million people worldwide in its first 24 hours and has currently been viewed more than 40 million times.

TRF, Pakistan’s IT cell for terror groups in Kashmir?

Evanescence lead vocalist Amy Lee: Strange not knowing when we can go back to work

Amitabh Bachchan is in a state of confusion

Rahul to Modi: Lockdown has failed, what’s the strategy to open India

Mumtaz reacts to death rumours: ‘I am not that buddhi’

Sobhita Dhulipala: I miss dressing up